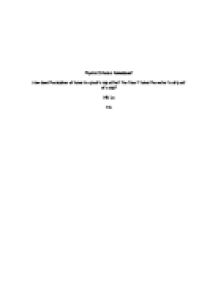 Problem: How does the number of holes in a paper cup affect the time it takes for the water to drip out of a cup?

Hypothesis: If there are more holes in the plastic cup, the time it takes for the water to drip out of the cup would decrease because there is no physical barrier to prevent the water from dripping out.

Manipulated Variable: The number of holes at the bottom of the cup

Responding Variable: The drainage time of the water

A graduated cylinder would be used to measure 50 mL (±2 mL) of water. This then would be poured into the cup.

Once all of the trials for the cup with one hole are recorded, repeat step one with the cups needing 2 holes, 3 holes, 4 holes, and 5 holes. Repeat steps 2-5. Record.

There are several ways to improve this investigation to make the data more accurate. To reduce the skewing effect of the water collecting on the side, one could have tested different cups to see which is the best at water drainage. If all of the cups still collected water on the sides, then more trials could have been tested to get a better average of the times it took the water to drain out. Thus there would have been less skewed points. Another way to improve this investigation would have been to tape each cup to the ring stand so that the cup would not have tilted at an angle when the water was poured because certain angles allowed the water to drain faster or slower due to shape of the bottom of the cup.