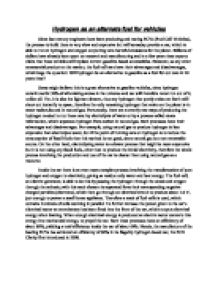 Hydrogen as an alternate fuel for vehicles

Since last century engineers have been producing and testing FCVs (Fuel Cell Vehicles), the process to build them is very slow and expensive but will someday provide a car, which is able to run on hydrogen and oxygen outputting zero harmful emissions for the planet. Billions of dollars have already been spent on research and manufacturing and in a few years time experts claim that these vehicles will replace current gasoline-based automobiles. However, as any other commercial product on the market, the fuel cell cars have their advantages and disadvantages, which begs the question: Will hydrogen be an alternative to gasoline as a fuel for our cars in 20 years time?

Some might believe this is a great alternative to gasoline vehicles, since hydrogen constitutes for 90% of all existing atoms in the universe and we will therefore never run out of it, unlike oil. Yet, it is also the lightest element, thus any hydrogen that purely exists on Earth will shoot out instantly to space, therefore the only remaining hydrogen that exists on the planet is in water molecules and in natural gas. Fortunately, there are currently two ways of producing the hydrogen needed to run these cars: by electrolysis of water or by a process called steam reformation, which separates hydrogen from carbon in natural gas. Both processes have their advantages and disadvantages.

Another issue for companies attempting to make FCVs popular in the future is the lack of infrastructure from where customers can obtain hydrogen to use their cars. A big change in groundwork is required to make these cars a viable alternative to people. Some analysts expect the price of building the amount of hydrogen stations throughout the USA required to reach all Americans to be as high as half a trillion dollars. Right now there are only 20 functioning stations in California, with an expansion plan of 8 more later this year.  However, some experts agree that another more cost-effective solution, rather than installing thousands of hydrogen delivery systems, is to implement a small hydrogen plant into customers’ garages as an alternative to fueling up at a hydrogen station. This is still in research, as a great leap in technology is needed for customers to have a medium sized, and not very expensive hydrogen converter in their homes. For all these reasons, fuel cell cars can only be leased in California and other countries like Germany or Japan, where there is a very limited infrastructure for these cars. The number of fuel cell cars on the streets is of roughly 300 worldwide.

Therefore, in recent years there have been endless debates on whether these cars will be worth investing in, since there are already less clean but cheaper alternatives to FCVs like hybrid cars.

In conclusion, it can be said that progress will be made towards making the transition to using hydrogen as a fuel in the next years or decades in first-world countries like the USA, Japan and probably in Europe, however, it will not reach the current level of market penetration the gasoline already has, even in those countries. In other regions of the world like Latin America and parts of Asia this transition will be seen even at a slower rate, even if governments are committed to being eco-friendly, the economic factor will lead it to be impossible in such a short period of time. Even though, the evolution to another fuel from gasoline will not be completely made in 2030 it is possible to say it will happen towards the end of the year 2060 worldwide, giving enough time to most countries to accommodate to all the changes required to support hydrogen as their main fuel.