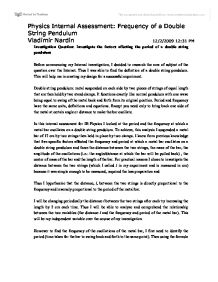 Investigate the factors affecting the period of a double string pendulum

Investigation Question: Investigate the factors affecting the period of a double string pendulum

Before commencing my Internal investigation, I decided to research the area of subject of the question over the Internet. Thus I was able to find the definition of a double string pendulum. This will help me in creating my design for a successful experiment.

Double string pendulum: metal suspended on each side by two pieces of strings of equal length that are then held by two stand clamps. It functions exactly like normal pendulum with one wave being equal to swing of the metal back and forth from its original position. Period and frequency have the same units, definitions and equations. Except you need only to bring back one side of the metal at certain angle or distance to make the bar oscillate.

Thus I hypothesize that the distance, l

Then I pulled back the left side of the metal bar with my left hand until it was 90 degrees from its original position completely perpendicular to my body facing my apparatus. Whilst with my right hand I got ready to press the ‘start’ button of the digital timer. I then released the metal bar without exerting any other force and this caused to oscillate back and forth from the 90 degrees position to its original or resting position and back again. Then in my head, I started to count the number of waves (swing of the metal bar back and forth from its original position) and stopped the timer when I had counted 10 waves. I repeated this very step 5 times to minimize human error and get a fair average of the recorded values. After inscribing the values recorded for the five tries, I added them all together and divided the resultant by five to get average.

I then proceeded to repeat the above steps for the different distances of l  (specific measurements in the first paragraph of my method) for 4 cm, 6 cm, 8cm, 10 cm and 12 cm. Each time I proceeded with a

±0.2 seconds for my human error and reaction time and speed. However I would need to bring the total number of waves to be counted to 5 and the number of tries to 3 to make it less tedious and long for me and to increase my human reaction time and speed if I was to redo this investigation. However for human error due to my perception and a decreasing period, I would need to employ a second person that will concentrate solely on the timing and digital timer of the period. However co-ordination and good interaction would be needed between the two persons would be needed for this work.

However this factor of error was not the only to be a limitation to my investigation as the digital timer had only two decimal places there was an error of ±0.01 seconds therefore the grand total error of ±0.21 seconds to be taken into account in all my tables and graphs. In addition to this the sue of the 30cm ruler was fairly inaccurate and  I should have taken a 15 cm ruler to do my measurements, thus the measurement of the distance between the two strings might have incorrect to a few mm. This was not due poor equipment or instruments but my lack of judgement on using better material. Another important limitation was my inaccuracy at tying knots to hold the metal bar in the horizontal plane parallel to the clamps, thus perhaps my strings were a few cm off from one another. Tying knots and better judgment regarding equipment are two things I should do before starting a knew investigation further on in this domain.

Taking these errors into account, I may have been able to improve on them in a number of ways in order to further support my conclusion, or even disprove it.