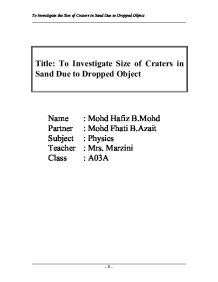 Investigate the Size of Craters in Sand Due to Dropped Object.

Based on the theory, when the potential energy is increased, at the same time kinetic energy will increase too in virtue of its motion. If energy is conserved which indicates that PE is equal to KE and no energy loses to the surroundings. The velocity of the slotted mass dropped at each height and it impulse can be obtained.

Calculation of Uncertainties for the Volume of the Craters:

In order to calculate the uncertainties for the volume of the craters, we can use the formula below:

that we used is in the unsatisfied condition. Actually, many laboratory apparatus is already outdated. For example, the scale is not accurate or precise than it supposed to be.

There are several ways to overcome these problems from occurred again. We can prevent it by making some improvements: