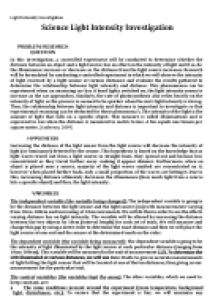 ﻿Light Intensity Investigation Science Light Intensity Investigation PROBLEM/RESEARCH QUESTION In this investigation, a controlled experiment will be conducted to determine whether the distance between an object and a light source has an effect on the intensity of light and if so, do the illuminance increase or decrease as the distance from the light source increases. Research will be formulated by conducting a controlled experiment in which we will observe the intensity of light received by a light sensor at various distances and evaluate the results gathered to determine the relationship between light intensity and distance. This phenomenon can be experienced when an oncoming car has it head lights switched on, the light intensity seems to increase as the car approaches. Similarly, the rate of photosynthesis also relies heavily on the intensity of light, as the process is seemed to be quicker when the sun?s light intensity is strong. Thus, the relationship between light intensity and distance is important to investigate so that experimental reasoning can be deducted for these phenomena?s. The intensity of the light is the amount of light that falls on a specific object. This measure is called illuminations and is expressed in Lux when the distance is measured in metric terms. A lux equals one lumen per square metre. (Anderson, 2009) HYPOTHESIS Increasing the distance of the light sensor from the light source will decrease the intensity of light (or luminance) detected by the sensor. This hypothesis is based on the knowledge that as light waves travel out from a light source in straight lines, they spread out and become less concentrated as they travel further away- making it appear dimmer. Furthermore, when an object is placed near a source, majority of the light waves emitted are concentrated on it, however when placed further back, only a small proportion of the waves are hitting it. Due to this, increasing distance ultimately decreases the illuminance (how much light from a source hits a specific object) ...read more.

50 60 3 12 60 60 3 12 70 60 3 12 80 60 3 12 90 60 3 12 100 60 3 12 Method: 1. Collect all necessary equipment and plug in the light source (or ray box) into the DC transformer and then the transformer into a power point. 2. Set the power tuner to 12 volts (maximum) and place at one end of the desk with the bulb facing inwards. 3. Place the ruler directly in front of the light source so that one end (marked 0cm) is almost in line with the light bulb. This is so that the centimetre markings on the ruler are the actual distance from the light source. Macintosh HD:Users:160161:Desktop:Photo on 5-02-2014 at 2.41 pm #2.jpg 4. Attach the USB link to the light sensor (as shown in the image on the right) and then plug the USB link into the laptop. 5. Open Data Studio on your laptop, making sure that the connection between the application and the light sensor is strong. Once done, press the sunlight button on the light sensor and hold until it turns yellow. 6. Slide the white cardboard sheet into the back of the light source and shut the flaps on the sides so that light escaping out the back and sides is minimized. Make sure all other lights have been turned off and natural light has been minimized as well, making sure it stays the same for all trials. 7. Place the wooden block next to the 10cm mark on the ruler, ensuring that it is directly in line with the front side of the light source. Macintosh HD:Users:160161:Desktop:Photo on 5-02-2014 at 2.40 pm #2.jpg 8. Set the light sensor on top of the block ensuring that the front nozzle faces towards the light source and the tip is also in line with the 10cm mark on the ruler. ...read more.

We attempted to solve this problem by using sheets of paper to make a rectangular dome around the set up. This somewhat controlled the impact of background light, however it was not able to completely as the paper was only able to dim and reduce the intensity of light passing through into the set up and consequently, to the light sensor. This problem had a minor affect on the reliability of our data, although not enough to determine the test invalid, as we were still able to establish a relationship between distance and light intensity with reasonably accurate data that was otherwise reliable as no other problems were experienced. Our method was fairly clear, concise and allowed us collect our data in a fairly orderly way, doing so for most tests. It allowed us to complete the experiment with accuracy excluding the human errors present that occur in most experiments and the major problem (mentioned above) that were inevitable based on the way the experiment was conducted. Although our method and experimental plan were quite accurate, easy to understand and allowed us to achieve our target of determining a relationship through a small-scale experiment, there are still many improvements that could be made to it to improve the validity of our results and further experiments could be carried out to extend this investigation. These include: * Completely eliminating the background light by conducting the experiment in a dark room with no other light source other than the 12volt light bulb so that reliability is improved. * Using shorter intervals between distances (i.e. 5cm) so that our rule (y = 161484x-1.661) will be more accurate with a larger sample size. * Positioning the light sensor at various heights and angles so that we can investigate how light waves travel and in which direction the intensity is at its greatest. * Using different types of light (infrared, ultraviolet, etc.) to investigate which type has the highest frequency. ...read more.