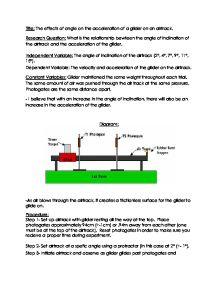 Physics Airtrack Experiment. The effects of angle on the acceleration of a glider on an airtrack.

Title: The effects of angle on the acceleration of a glider on an airtrack.

Research Question: What is the relationship bewteen the angle of inclination of the airtrack and the acceleration of the glider.

Dependent Variable: The velocity and acceleration of the glider on the airtrack.

Constant Variables: Glider maintianed the same weight throughout each trial.  The same amount of air was pushed through the air track at the same pressure.  Photogates are the same distance apart.

-As air blows through the airtrack, it creates a frictionless surface for the glider to glide on.

Procedure:
Step 1- Set up airtrack with glider resting all the way at the top.  Place photogates approximately 94cm (+-1cm) or .94m away from each other (one must be at the top of the airtrack).

-To solve for the acceleration of the glider on an inclined plane you have to consider that a=gsinΘ because acceleration is proportional to gsinΘ as well as to the force of gravity, or g.  Acceleration can be solved by finding the time it takes for the glider to pass through both photogates.  By doing that you have both time and distance so the equation Δx=(1/2)at².  Comparison of accelerations taken from both equations should show that data is accurate on the air track. Plug in the previous equation so that a=gsinΘ and it is possible to find acceleration through given data.  Error was found through a quick calculation: the shortest trial subtracted from the longest trial and that value divided by 2. 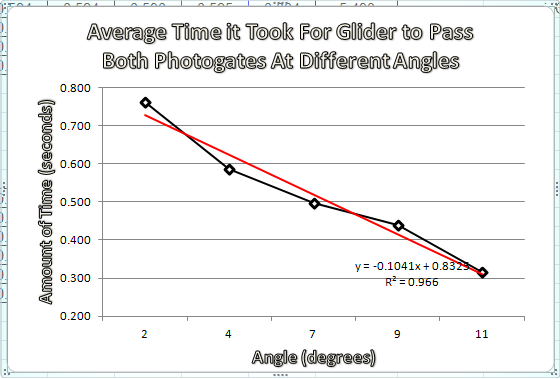 The results of this experiment show that as the angle of inclination increases, as does the velocity, but the acceleration slowly decreases.  My initial hypothesis was proven wrong through experimentation.  Not only the hypothesis, but the two equations Δx=(1/2)

(did not use proceudre, simply used conclusion as verification)