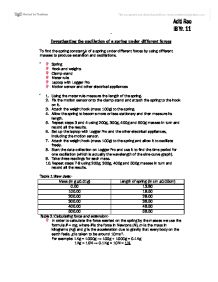 PHYSICS LAB REPORT Investigating the oscillation of a spring under different forces Aim: To find the spring constant k of a spring under different forces by using different masses to produce extension and oscillations. Apparatus: * Spring * Hook and weights * Clamp stand * Meter rule * Laptop with Logger Pro * Motion sensor and other electrical appliances Method: 1. Using the meter rule measure the length of the spring. 2. Fix the motion sensor onto the clamp stand and attach the spring to the hook on it. 3. Attach the weight hook (mass 100g) to the spring. 4. Allow the spring to become more or less stationary and then measure its length. 5. Repeat steps 3 and 4 using 200g, 300g, 400g and 500g masses in turn and record all the results. 6. Set up the laptop with Logger Pro and the other electrical appliances, including the motion sensor. 7. Attach the weight hook (mass 100g) to the spring and allow it to oscillate freely. 8. Start the data collection on Logger Pro and use it to find the time period for one oscillation (which is actually the wavelength of the sine-curve graph). ...read more.