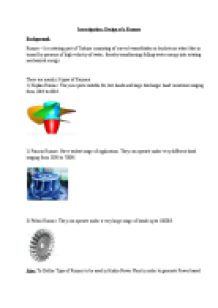 Investigation: Design of a Runner

Runner – Is a rotating part of Turbine consisting of curved vanes/blades or buckets on wheel that is turned by pressure of high veloctiy of water, thereby transforming falling water energy into rotating mechanical energy.

There are mainly 3 types of Runners:

1) Kaplan Runner: They are quite suitable for low heads and large discharge/ head variations ranging from 10M to 60M.

2) Francis Runner: Have widest range of application. They can operate under very different head ranging from 30M to 700M.

3) Pelton Runner: They can operate under a very large range of heads up to 1800M.

Aim: To Define Type of Runner to be used in Hydro Power Plant in order to generate Power based on the net head of water and flow rate.

Research question: How does the Water head and flow rate effect the type and size of Runner.

Pelton turbines are impulse turbines where one or more jets impinge on a wheel carrying on its periphery a large number of buckets. Each jet issues water through a nozzle with a needle valve to control the flow. They are only used for high heads from 60 m to more than 1 000 m. The axes of the nozzles are in the plan of the runner. In case of an emergency stop of the turbine (e.g. in case of load rejection)

The flow enters in a radial manner inward and makes a right angle turn before entering the runner in an axial direction. The control system is designed so that the variation in blade angle is coupled with the guide-vanes setting in order to obtain the best efficiency over a wide range of flows and heads. The blades can rotate with the turbine in operation, through links connected to a vertical rod sliding inside the hollow turbine axis.

Bulb units are derived from Kaplan turbines, with the generator contained in a waterproofed bulb submerged in the flow.

Kaplan turbines are certainly the machines that allow the most number of possible configurations. The selection is particularly critical in low-head schemes where, in order to be profitable, large discharges must be handled. When contemplating schemes with a head between 2 and 5 m, and a discharge between 10 and 100 m3/sec, runners with 1.6 - 3.2 metres diameter are required, coupled through a speed increaser to a generator.

It should be noted that it is difficult to measure the height at the discharge, so measure it say 300mm to 600mm back from the weir.

For larger creeks, this method involves the cross sectional area of the flow and the speed of the flow. If you wish to ascertain the flow rate of a stream, when the 10 litre bucket method cannot be employed, you can get a rough idea by measuring the size (cross section) and average flow rate of the stream.

For this method the speed of the mid-stream surface water is measured by timing a float. Choose a part of the stream where the cross section is regular. Measure the cross section by finding the average depth as shown, and the width. Time the float over a short distance to obtain the speed.

The average speed of the whole stream can then be calculated by multiplying the measured speed by:

0.8 for a concrete channel

0.7 for an earth channel

0.5 for a rough hill stream

If the measurements are taken in metres and the float is timed in seconds, then the result multiplied by 1000 will give you the litres per second flow rate. Overall accuracy of this method is about 80%.