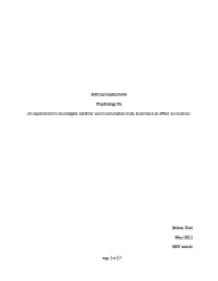 ﻿Internal Assessment Psychology HL An experiment to investigate whether word connotation truly does have an effect on memory Bobae Choi May 2012 1897 words Abstract This replication of Loftus and Palmer?s (1974) experiment has the aim to investigate if word connotation truly does have an effect on memory and was experimented on twenty (ten males, ten females) grade twelve history students in a high school in Langley, B.C. The research hypothesis is that speed estimates will be statistically significant depending on the aggressiveness or passiveness of the word. As a result of being an experiment, the independent variable is the connotation of the word (smashed or contacted) and the dependent variable is the speed estimate from the train when crashing into the school bus. The numerical descriptive statistics used range and median because ordinal data was present. Two results were produced from the median, with the range produced 71 for smashed and 51 for contacted and the verb smashed being 40 and 50 for the word contacted. Using the Mann Whitney U test for inferential statistics, the critical value of U was found to be less than both the smallest values of U1 and U2; as a result the null hypothesis shall be accepted therefore concluding that there is no significant statistical difference on memory through positive and negative connotations in this experiment. ...read more.

Limitations in the research design could have been the knowledge of the experiment beforehand since there was a high chance of the participants already knowing what the experiment was about (demand characteristics). This would have been easily avoided by using classes that haven?t been taught psychology or haven?t been experimented on. Another limitation of this research was its sample size, which can make it much more difficult to compare to a larger portion of the world, such as the term generalizability. This can be avoided by finding a larger population to make this experiment more reliable. Limitations in the procedure could be that the participants may have been exchanging information with their peers which ruins the credibility of their own answer. In conclusion, this experiment failed to match Loftus? and Palmer?s (1974) research. The data that was collected during this experiment proved to not support the theory of schema because of many problems that came up which ultimately lead to non-statistical significant number changes. Things that would have greatly improved this research would be fixing the limitations (such as the sample size and knowledge by going into other areas across the world and getting the participants? knowledge information beforehand to switch participant groups). ...read more.