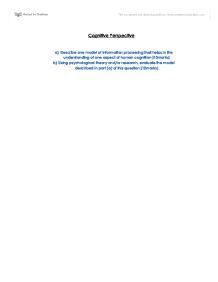 The Working Memory Model consists of 3 major components; the central executive, the phonological loop and the visuo-spatial sketchpad. Firstly, the central executive plays a role in organising and distributing information gathered from the long-term memory. It has a limited capacity, and it connects the various functions from the other two components of this memory model, hence it controls the phonological loop and the visuo-spatial sketchpad.

Another part of the Working Memory Model, is the visuo-spatial sketchpad. This component is known as the “inner eye”, which is responsible for visual and spatial information. It is a temporary store for visual and spatial information. Once again, like the phonological store, the visuo-spatial sketchpad can receive information directly through the sensory register (iconic) or the long-term memory.

The Episodic Buffer is a small component of the Working Memory Model, which responsible in linking up the phonological loop, visuospatial sketchpad together. The main reason that this component was added was because amnesia patients have good short-term recall of stories. Much more information is recalled from the phonological loop than possible, hence, it was believed that the episodic buffer could have played a role.

The Working Memory Model by Baddeley and Hitch is a model of information processing which tries to explain the function of short-term memory in human cognition. This is illustrated through the 3 major components: the central executive, the phonological loop and the visuo-spatial sketchpad, and also, a minor aspect of this model is the episodic buffer. Thus, the Working Memory Model helps in understanding short term memory.

b) A strength of the Working Memory Model developed is that it based on sound scientific research and psychological theory. In the cognitive perspective, there are several empirical studies to support this model.

For example, Baddeley’s 1966 experiment investigating the effects of acoustic and semantic word sequences on short-term memory illustrates how information is processed and stored. In the study, participants were given lists of acoustic or semantic word sequences. The results showed that there was higher mean percentage recall for the semantic group, compared to the acoustic group which had a lower percentage, Baddeley suggested that the participants “spoke” the word-sequences to themselves, in their head. This is explained in the Working Memory Model as the articulatory control system, or the “inner ear”. The study was a laboratory experiment; hence it had well controlled variables and a distinct independent variable, allowing cause and effect to be determined.

A case study on an anterograde amnesia patient, known as “K.F” supports this model. K.F. had a severe motor-cycle accident, which resulted in brain damage in his left parieto-occipital region. Consequently, K.F. had problems with his short-term memory, letters and words with significant sounds, such as “doorbells” and “cats meowing”. Despite this, other components of his short term memory were unaffected, as he was able to form visual long term memory. Hence his visuo-spatial sketchpad was not destroyed. This case study on K.F. supports the Working Memory Model rather than the Multi-store model.

The Working memory Model has high ecological validity, because it tries to explain how short-term memory works in a real-life situation. It is also based on real case studies, like the study on K.F. This model seems applicable in a real-life situation, for example, if a person would like to remember a phone number, they would picture the number and rehearse it.This complies with the different components of the Working memory Model.

This model is more “active” and “interactive”. It tries to explain how the different components interact together to help short-term memory. It is not unitary, like the Multi-store model by Atkinson and Shiffrin, which is rather passive. Hence, the model is not reductionist, as it does not try to simplify a complex behaviour, such as short-term memory, into a simplistic model.

The Working Memory model also consists of the Episodic Buffer. This component tries to explain how we remember orders of events. This aspect illustrates a limitation of the model as is not yet clearly understood; hence it requires more research to understand the major role of the Episodic Buffer. Similarly, the role of the central executive is still vague, and requires more research to understand its role.

Similarly the Central Executive is also not well understood.

The Working Memory model is based on studying cognitive processes. However, these processes are difficult to measure properly, as it is not observable. Some of the empirical studies are laboratory-based; hence it does have a limited ecological validity. However, the research has tried to overcome this, by focusing on real life examples, such as case studies like K.F.

Another limitation of this model is that it does not actually explain forgetting, and it’s relation to short-term memory. Consequently, Baddeley has stated that “The explanation of forgetting…remains an open question”

Cross-cultural studies have suggested that children who were not schooled did not have the same learning skilled as a child who has gone to school. For example, the non-schooled children did not develop “chunking” or categorising information, hence is suggest that schooling affects how our memory works. (Cole and Scribner) Thus, it would affect how one’s short-term memory would function.

Hence, empirical research in the cognitive perspective has played a role in the development of the Working Memory Model by Baddeley and hitch. There are several strengths and limitations associated with this model of information processing. Thus, the Working Memory Model tries to explain how short-term memory works, and it has triggered considerable further research in this area, in the cognitive perspective.