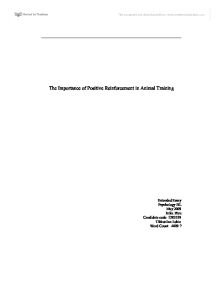 The Importance of Positive Reinforcement in Animal Training Extended Essay Psychology HL May 2009 Erika P�rn Candidate code: 1292019 Tikkurilan Lukio Word Count: 4009 ? Abstract The research question of this essay is that to what extent is positive reinforcement effective in animal training? Animal training has for a long time been known for its simple concepts on conditioning animal responses through the use of reinforcement and punishment. However with the recent fascination and exploration of animal intelligence we may be able to adapt better means of reaching cooperation with animals. Concentration of this essay is specifically the use of positive reinforcement as an enhancement in the relationship between the trainee and trainer. The idea being explored in this essay is the notion of positive reinforcement and its impact. In attempt to understand positive reinforcement and its effects on the trainee. Positive reinforcement can be seen as the most effective of reinforcements. It can be defined as immediate consequence after a given behavior that increases the likelihood of being repeated when the similar situation is encountered. The notion of animal intelligence has continued to marvel mans imagination for centuries. The innovation of higher cognitive capabilities in non-human animals has proved to be a very successful field of study in recent times. Novel ideas on behalf of insight and intelligence in association with animals has raised many ethical and moral questions about the utilization of animals within human societies. It has been only recently since man has been able to let go of the anathema concerning animal intelligence within the scientific world. Table of Contents 1.0 Introduction 1.1 Difference Between Positive and Negative Reinforcement and Punishment 1.2 The Goals of Animal Training 1.2 Ethics of Animal use in Training 2.0 The Power of Positive Reinforcement in Successful Training 2.0.1 Additional Tools for Successful Training 2.1 Communication and Concrete Rewards in Training 2.2 Learning Through Reinforcement Requires Information Processing 2.2.1Reinforcement and Species Specific Behavior 2.2.2 Animal Intelligence in Relation to Reinforcement 2.2.3. ...read more.

Generally it could be stated that if the environment ignores a behavior that particular behavior will extinct. Extinction is used in decreasing certain unwanted behavior. This is used when modifying behavior for the wanted responses to emerge during animal training. As an example when training horses they are rewarded with food given to them from the hand. This may later result in the horse biting hands as it has acquired enough knowledge to comprehend that food is consumed from the hand. If the trainer, in order to get rid of the horse biting, takes the hands away from horses reach i.e. in the pockets, and not give reward (food) to the horse then the horse will be less likely to try bite the hands further again. To make extinction even further effective positive reinforcement should be combined with it. Thus after the horse has stopped trying to bite the trainers hands the horse may receive praise such as a pat on the neck. 2.1 Communication and concrete rewards in training In every community of species animals maintain contact with its members. As human beings we communicate through verbalization and are apt to expect similar type of communication between animals. (Scott,1958 :189) Animal language research is the modeling of human language in animals. There have been successful attempts to teach language or language-like behavior to some non-primate species. Teaching sign language to a chimpanzee proved to be successful in the case of Washoe by Gardner & Gardner (1969). This wild female chimpanzee as a participant showed increasing frequencies in new acquired signs during 16 months of observations. There are ethical implications behind this research. Since chimpanzees were able to talk then in this case should not human rights also be applied to apes? (Herman et al 1984:pp). The implication of intelligence from acquiring language like behavior is still controversial. It can be seen as increase of skill of operant conditioning responses in order to gain a reward. ...read more.

Leading to the search for comparable human mental processes in other species. Research results showed various promising results on behalf of non-human animals and their higher cognitive abilities. Creating an even more prominent scene over ethical rights of animals. Thus making it all the more critical for conventional animal training methods to be under new evaluation. Such a shift in the world of science challenged all conventional norms of the way society looked at humans and other species. As it comes to animal training so far we have established that the most powerful use of reinforcement is positive reinforcement. When training with animals it is important to induce as little harm and discomfort as possible. Minimizing pain not only shows successful results in training it also offers the safety of not violating ethical standards. Positive reinforcement allows for the animal to be more comfortable with the trainee. In addition when using positive reinforcement with other tools in animal training such as extinction learning occurs all the more faster. With new aquired knowledge on behalf of animal intelligence, and commonalities between human and other species brains should we not eliminate most forms of aversive stimuli used in training. Animals are capable of performing higher form of processing. The method used by Tolman could be put to use in animal training as well. Could learning not be inhibited through this type of formation of appropriate behavior by the animal. What if the trainer is associated as positive reinforcement. Not in any sense reducing the role of the trainer to a requested reward. On the contrary highlighting the key role of the trainer. The trainer accumulates positive feeling in the trainee. From playing, nurturing to rewarding. So that whenever dealing with the animal the trainers presence is enough reinforcement to a certain extent. This would further enhance similar results of insight. The trainee will try to formulate new behavior and learn through insight in order to please the trainer. Bringing about animal intelligence. Modern animal training need not be about whistles and rewards. It can come down to the integral relationship between the trainer and trainee. ...read more.