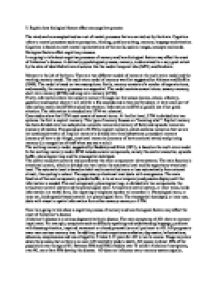 I am going to talk about cognitive processes of memory and how biological factors may affect the onset of Alzheimers disease.

3. Explain how biological factors affect one cognitive process The mind can be conceptualized as a set of mental processes that are carried out by the brain. Cognition refers to mental processes such as perception, thinking, problem solving, memory, language and attention. Cognition is based on one's mental representations of the world, such as images, concepts and words. Biological factors affect cognitive processes. I am going to talk about cognitive processes of memory and how biological factors may affect the onset of Alzheimer's disease. A distinctly psychological process, memory, is determined to a very great extent by the state of identifiable brain structures like the medial temporal lobe (MTL) and forebrain. Memory is the job of the brain. There are two different models of memory: the multi-store model and the working memory model. The multi-store model of memory was first suggested by Atkinson and Shiffrin (1968). The model is based on two assumptions: firstly, memory consists of a number of separate stores, and secondly, the memory processes are sequential. The model contains several stores: sensory memory, short-term memory (STM) and long-term memory (LTM). Firstly, information enters into sensory memory through our five senses (iconic, echoic, olfactory, gustatory and haptic) where it will stay for a few seconds and is then lost by decay. A very small part of information enters into STM by selective attention. ...read more.

The amyloid plaques are formed from the degenerating axons and dendrites and contain a dense core of amyloid-� protein. These plaques accumulate in the spaces between neurons. There is a lot of evidence for the involvement of amyloid-� protein in the onset of AD. In fact, most of the AD patients accumulate amyloid plaques before the onset of disease. Neurofibrillary tangles are caused due to the accumulation of an abnormal form of the tau protein, which have been found in the brains of the AD patients. This protein normally forms part of the support structure of neurons. In Alzheimer's disease, the tau protein is abnormal and as a result, the structural support of neurons collapses. The abnormal protein produces neurofibrillary tangles in which microtubules are twisted around each other. They are found in the cell body and dendrites of neurons. The formation of amyloid plaques and neurofibrillary tangles are thought to contribute to the degradation of the neurons in the brain and the subsequent symptoms of Alzheimer's disease. As a result of this degradation, the cerebral cortex and the hippocampus, as well as additional areas, suffer from widespread atrophy(shrinking). I am now going to talk about a study done by Hodges et al. (1994). The aim of this study was to determine which parts of memory are affected in Alzheimer's disease and to measure the difference and decline in semantic memory in the patients with Alzheimer's disease to those who do not have the disease.. ...read more.

A field experiment decreases the internal validity. If the internal validity is not high, the conclusions made are not correct interpretation, and the variables defined could not all be accurately and appropriately manipulated and measured in a representative sample. The internal validity of this experiment is decreased by the fact that the experimenter could not measure whether all the caretakers experienced the same level of stress and did not know whether there were other external factors which also created extra stress. The sample was not representative of the whole population. The problem with a purposive sample is that it is often very subjective, however the use of purposive sampling was justified by the researcher by trying to measure the affect on the Alzheimer patients' caretakers health. There were not enough participants to make generalizations. External validity means that research conclusions can be applied to different settings because the sample is representative and the research context has had a controlled and minimal impact on the findings. The external validity is not high as the sample is not representative of whole population. Reliability refers to the consistency of a measure. An experimental design is considered reliable if we get the same results repeatedly. The test-retest reliability of this experiment is increased because the results were measured over 8 weeks time. The inter-rater reliability is also increased as more than one experimenter was dealing with the experiment. This discussion of AD demonstrates the close connection between cognitive and biological level of analysis. ...read more.