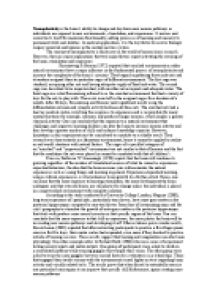 ﻿Neuroplasticity is the brain?s ability to change and lay down new neuron pathways as individuals are exposed to new environments, stimulation, and experiences. It rewires and reconstructs itself for maximum functionality, adding processes of learning and memory to permanent skills and abilities. In medical applications, it is the key factor to recover through surgery removals and injuries in the central nervous system. The concept of neuroplasticity is fairly new in the world of neuroscience research. However, they are many implications that two major factors report activating the rewiring of the brain; stimulation and experience. Rosenzweig & Benson (1972) reported that enriched environment or rather natural environment have a major influence in the fundamental process of neuroplasticity and increase the complexity of the brain?s circuitry. They began by gathering three male rats and at random assigned them to particular cages of different environments. The first cage was standard, occupying other rats and having adequate supply of food and water. The second cage was described to be impoverished, with no other rat occupants and adequate water. The third cage was what Rosenzweig referred to as the enriched environment that had a variety of toys for the rats to play with. ...read more.

According to the study conducted by University College London; Maguire (2000), long term experience of spatial jobs, particularly taxi drivers, have more grey matter in the posterior hippocampus compared to non-taxi drivers from days of memorizing maps and the city?s geography to stimulate the growth of extra grey matter in the posterior hippocampus that deals with produce more neural circuitry in that specific region of the brain. One can conclude that the more exposure to that skill or experience, the more plastic the brain will be in creating new neuron pathways and developing itself. Other evidence prove similar results, Pascal-Leone (2002) reported that after instructing participants to practice a five-finger piano exercise for five days, their motor cortex had expanded, even more if they decided to practice outside of training sessions. These results suggest that training and imagination can alter brain physiology. One other example refers to Richard Held (1960) who ran a series of experiment testing sensory inputs and motor outputs. One group of participants were asked to stroll on a convoluted pathway while wearing goggles that warped their vision. ...read more.

Stress can also affect the way humans deposit fats in their body. Research done by White Hall Study (1985) observed that chronic stress in humans could alter the way they gain weight. It is dangerous because fat carried in the midsection or abdomen is much worst than anywhere else in the body. In addition, stress increase blood cholesterol levels through the action of adrenaline on the release of fatty acids. These cholesterol particles will clump together and block pathways in artery walls that may result to atherosclerosis and further death if not stopped. A study by Epel et al., (2004) investigated that fragile telomeres were a result to chronic stress. Telomeres act as a protective cover for chromosomes for proper replication. As more stress hormones are released, the more consequence it has on physiology. Environment has a profound affect on physiology that shapes our brains and body everyday. Stimulations and experiences that deal with learning enhances neuroplasticity and provoke a heavier more complex cerebral cortex, while common exposure to chronic stress provoke negative consequences of physiology. Thus with research, one can ascertained that the experience we face daily affect our body and mind, whether positively or negatively. The brain is an evolutionary organ that alters its structure according to your experiences. ...read more.