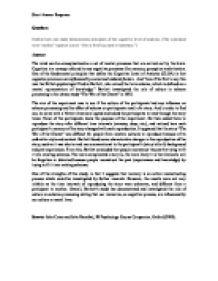 Outline how one study demonstrates principles of the cognitive level of analysis. Bartlett investigated the role of culture in schema processing in his classic study The War of the Ghosts in 1932.

Question: Outline how one study demonstrates principles of the cognitive level of analysis. (The command term "outline" requires you to "Give a brief account or summary.") Answer: The mind can be conceptualized as a set of mental processes that are carried out by the brain. Cognition is a concept referred to any cognitive processes like memory, perception and attention. One of the fundamental principles that define the Cognitive Level of Analysis (CLOA) is that cognitive processes are influenced by social and cultural factors. ...read more.

And in order to find out, he came with a Native American legend and asked the participants to read through the story twice. None of the participants knew the purpose of the experiment. He then asked them to reproduce the story after different time intervals (minutes, days, etc.), and noticed how each participant's memory of the story changed with each reproduction. It appeared that the story "The War of the Ghosts" was difficult for people from western cultures to reproduce because of its unfamiliar style and content. ...read more.

by trying to fit it into existing schemas. One of the strengths of this study, is that it suggests that memory is an active reconstructing process which could be investigated by further research. However, the results were not very reliable as the time intervals of reproducing the story were unknown, and different from a participant to another. Overall, Bartlett's study has demonstrated and investigated the role of culture on schema processing stating that our memories, as cognitive process, are influenced by our culture or social lives. Source: John Crane and Jette Hannibal, IB Psychology Course Companion. Oxford (2009). ?? ?? ?? ?? Short Answer Response ...read more.