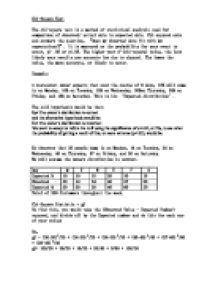 Statistical Analysis for IB Psychology. The chi-square test is a method of statistical analysis used for comparison of observed/ actual data to expected data.

Chi-Square Test The chi-square test is a method of statistical analysis used for comparison of observed/ actual data to expected data. Chi-squared asks and answers the question, "Does my observed data fit with my expectations?". It is measured as the probability for your event to occur, p> .05 or p<.05. The higher your x2 (chi-square) value, the less likely your results are accurate (or due to chance). The lower the value, the more accurate, or likely to occur. Example: A restaurant owner expects that over the course of 6 days, 10% will come in on Monday, 10% on Tuesday, 15% on Wednesday, 20%on Thursday, 30% on Friday, and 15% on Saturday. This is his 'Expected distribution'. The null hypothesis would be that: H0= The owner's distribution is correct and the alternative hypothesis would be: H1= The owner's distribution is incorrect We want to accept or refute the null using the significance of ? =.05, or 5%, to see what the probability of getting a result of this, or more extreme (p<.05), would be. ...read more.

Critical Chi-Square Value: Determine the Degrees of Freedom - We're taking 6 sums (6 days), so you may be tempted to say Degrees of Freedom =6, but if you have the first 5 values, you could find out the 6th, so we only have 5 Degrees of Freedom. We can say Degrees of Freedom = n-1 So, Our degree of freedom (D.F) is 5, our P value/significance is .05 or 5%, We can determine that our Critical chi-square value (?2c) is 11.07. Our D.F. is 5, so k=5 (magenta) If we continued the line, we would see that as the D.F. increases, the probability decreases. T-Tests The t- test is a method of statistical analysis used for comparison of sets of data. A t-test asks and answers the question, "Which set of data is higher?". The comparison must take into consideration the variability of data. Example: Hypothesis: Fluoride water prevents tooth decay. To test, the researcher looks at 5 communities that do have fluoride water, and 5 that do not. The dependent variable is the percent of the population with tooth decay, so a higher number is bad. ...read more.

sample one PLUS the Sample Variance of sample 2 SQUARED OVER number of observations in sample 2 So, for this experiment, this would look like: = 10.8/4.22 = 2.55924 t = 2.56 To use this t-value, we must compare it to the critical t-value for D.F. = 9. If our calculated value is > critical value in table, we can reject the null hypothesis. Assuming we use p< .05 or 5% (as in Chi-Square): Our calculated is 2.56, so Critical < Calculated We know that the null hypothesis of no difference between the means can be rejected, but that does not mean our hypothesis is either supported or rejected. We originally hypothesized that: Tooth decay is greater in communities without fluoride. Xf < Xnf From our data (% of population with tooth decay), we found that nf = mean of 22.4, f= mean of 11.6 We now know that 1. The means are significantly different; reject null 2. Difference between two means matches our hypothesis. Conclusion: We found that communities without fluoridated water had a greater percentage of the population with tooth decay than communities with fluoridation (t - 2.56, d.f.=9, p<.05) ...read more.