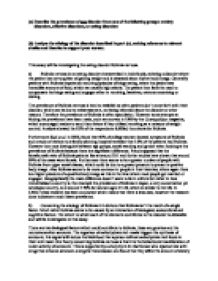 This essay will be investigating the eating disorder Bulimia nervosa.

(a) Describe the prevalence of one disorder from one of the following groups: anxiety disorders, affective disorders, or eating disorders (b) Analyse the etiology of the disorder described in part (a), making reference to relevant studies and theories to support your answer. This essay will be investigating the eating disorder Bulimia nervosa. a) Bulimia nervosa is an eating disorder characterised in individuals, as being a disorder where the patient has a strong fear of gaining weight and is obsessed about his/her body image. Generally patients with Bulimia experience recurring episodes of binge eating, where the patient eats incredible amounts of food, which are usually high calorie. The patient then feels the need to compensate the binge eating and engages either in vomiting, laxatives, extreme excerising or dieting. The prevalence of Bulimia nervosa is hard to establish as often patients don't come forth with their disorder, which can be due to embarrassment, not being informed about the disorder or other reasons. Therefore the prevalence of Bulimia is often speculation. However some attempts at finding the prevalence have been made, such as a survey in 1980 by the Cosmopolitan magazine, which encouraged readers to send them letters if they utilised vomiting as a measure of weight control. ...read more.

One theory concerning bulimia nervosa is that it is the behavioural manifestation of under activity of serotonin. This is supported by a study by H.E. Gwirtsman who injected rats with drugs that enhance serotonin-energetic transmission and found that they affect the amount of dietary carbohydrates and proteins that are consumed by the rats. Therefore the constantly low manifested serotonin levels could be an explanation for the binge eating. Another biological factor which can influence bulimia is the genetic make up of a person. Certain genetics could increase the chances of a person getting bulimia. This is shown in a study by Kendler et al. in 1991, who focused on bulimia in female twins. They investigated the concordance for bulimia nervosa in monozygotic and dizygotic twins. The study used 2163 female twins of which at least one had bulimia. The results were that the concordance rate for MZ twins was 23% while for DZ twins it was only 9%. This study shows that there is a certain correlation between genetics and bulimia as the concordance was far higher in MZ twins. However it also clarifies that bulimia is definitely not purely due to genetics as the concordance rate was far below 100%. ...read more.

The pressure society puts on women probably has an effect on the development of bulimia. Similar to anorexia nervosa, bulimia nervosa can also be influenced by the cognitive factor of self-perception. Generally people who develop bulimia are not overweight but suffer from a distorted perception of their body image. The correlation between the body image people have of themselves and bulimia prevalence is shown in a study by Jaeger et al. from 2002. They sampled 1751 medical and nursing students from 12 countries, including a mixture of Western and non-Western ones. A self-report method was used to obtain data on body dissatisfaction, self-esteem and dieting behaviour. The result was that extreme body dissatisfaction was found in mediterranean countries, followed by northern European countries, countries in the process of modernisation and then non-Western countries had the lowest levels of body dissatisfaction. As this is also very similar to the order of the greatest prevalence of bulimia it implies that there is a correlation between self-perception and bulimia. Overall all the above factors can be seen as part of the etiology of bulimia, however none can be viewed as singularly causing bulimia, as neither in genetics nor anywhere else was there a rate of 100% of people developing bulimia when a certain factor was given. Therefore all factors contribute and the development of bulimia comes from an interaction between them. ?? ?? ?? ?? ...read more.