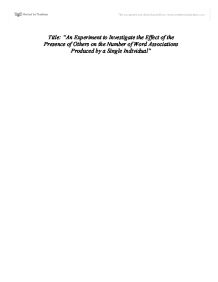 This experiment investigated the effect of the presence of others on the number of word associations produced by a single individual. It was a replication of an experiment carried out by Allport (1920).

Care was taken to secure conditions, such as type of table, light, air, and seating of the subjects in the rooms used for individual work comparable to those conditions in the room where the subjects worked as a group. In the experimental procedure, a constant interval of time was given (5 minutes), for each set list of stimulus words, in the group by spoken signal and alone through the blowing of a whistle. No method of deception of the participants was employed throughout the experimental procedure. The writing materials (pen, pencil, and so on) used by each participant were kept constant throughout the experiment. Participants The experimental sample was selected to be 16 participants. As far as the target population is concerned, it was selected to be Greek IB students attending a private school. Their social background reflected that of the high and middle social class. Participants were aged between 16 and 17 years and were of both sexes. All of them spoke English fluently. The students that were picked were not studying psychology since it was thought that they could possibly have knowledge of the study that was replicated. Random sampling procedure was employed for the selection of the participants so that more representative results could be obtained from the study. ...read more.

Having taken into account the aforementioned limitations, the following modifications can be proposed for our investigation: A larger sample of participants should be employed so that more representative results can be obtained for the target population. A double-blind methodology should be used to eliminate participant-expectancy effect by deceiving the participating individuals. It should be stated clearly in the standardized instructions that no communication between participants should be allowed. Our investigation can be slightly altered so that different variables can be investigated, such as the amount of time required for participants to come up with a specific number of word associations while working alone or in groups, or the average number of associations of various types the participants were able to come up with (personal, free rising, suggested by environment and so on). It would also be proper to conduct the experiment using a sample based on a different target group than the one employed in our study so that comparisons can be drawn in terms of the cultural and socioeconomic backgrounds of the different target populations. The implication of our findings is that the presence of others can help increase the productivity of a person carrying out a designated task. Our research hypothesis was supported. The presence of individuals around a single person will help him come up with a greater number of word associations from a set list of words than he would if he were to perform the designated task on his own. ...read more.