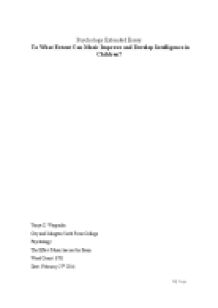 To What Extent Can Music Improve a Child's Intelligence?

﻿Psychology Extended Essay: To What Extent Can Music Improve and Develop Intelligence in Children? Tanya Z. Waqanika City and Islington Sixth Form College Psychology The Effect Music has on the Brain Word Count: 3781 Date: February 27th 2014 Abstract This essay consists of an investigation of To What Extent Can Music Improve and Develop Intelligence in Children. As the ?Mozart Effect? suggested the notion that music could improve spatial intelligence temporarily, it also brought into question whether music could also improve and develop other types of intelligence. The focus of this essay was therefore to determine if music did improve intelligence in children at all, which specific types of intelligence it improved and the extent to which it made an improvement. This investigation looked at how music affected linguistic intelligence, mathematical intelligence and IQ in children. I have used a combination of scientific and psychological journals, psychology textbooks and online resources in order to determine the ways in which music could improve each area of intelligence. I will also be investigating whether music actively causes these intelligences to develop and improve or if a predisposition to higher intelligences causes a child to be more inclined to take up and persist with music instruction instead. Throughout the research of this investigation, I was able to conclude that music appeared to have a significant effect on linguistic intelligence, particularly to do with second language acquisition. Music did not seem to improve mathematical intelligence overall, however it made proportional concepts in maths more understand. The way in which music affected IQ tended to lean one way or another, it seems likely that children with a generally higher intelligence would be more inclined to take up music lessons, and those music lessons would serve to reinforce their intelligence as a result. It was also suggested that music could be used as an educational aid, and that further research could look into how music affects learning specific languages, amongst other things. ...read more.

They found that, once they had controlled for previous academic achievement, adolescents had a moderate correlation between music and mathematical achievement and young children had a much stronger positive correlation between music participation and mathematical achievement. One of the limitations of this study was that the researchers were not able to look at how the duration of musical participation could have affected each of the children?s mathematical ability as well. Like Vaughn?s study, the results could only establish a relationship, but not the specific cause of the increase in mathematical achievement. Both Vaughn?s and Southgate?s findings are supported by Harris (2007), who found that young children had significantly increased mathematical ability after receiving a music-enriched Montessori education, compared to children who had only received traditional Montessori education. It is unclear in Harris? study if there was an equal amount of educational instruction for both groups of children, or if the music-enriched group had received more time to include the music instruction. If it were the case that the children with the music-enriched education had also received more instructional time, then these findings could have been a result of more instruction rather than the music training itself. Further support comes from Courey et al?s study, which investigated how effective music instruction was in teaching young children the basic mathematical concept of fractions (2012). As mentioned before, it would make sense for musical training to improve children?s understanding of fractions, as music notation typically includes notes that are fractions of a beat. Music training did appear to help the children to develop a more significant understanding of fractions and proportional mathematics; however, there are quite a few limitations with this study. The first major issue is that the participants of this study were not randomly assigned into each of the experimental and control groups and sample size is very small and limited to only one school. ...read more.

In regards to linguistic intelligence, music lessons do appear to help improve children?s ability to learn a second language. This is interesting to me, as I have learned to play six instruments and as well as seven languages. It is much more difficult to determine whether music also has a direct effect on general IQ in children, but the studies seem to suggest that there is a bidirectional relationship between music training and general IQ. That is to say, children who naturally have a higher intelligence may be more inclined to take up music lessons and those music lessons in turn help to reinforce their intelligence. These conclusions are significant as they could encourage educators to incorporate music as an additional aid in children?s education. At the very least, there is no incentive to complete cut out music programs from young children?s educations, as it does not have an adverse effect on their intelligence. Further experimental research must be done to establish precisely if music does effect intelligence at all, if it is the other way round or even if the relationship between music and intelligence is mutual. Some of the questions raised by this topic include ?Are there specific types of music instruction that have a greater effect on intelligence?? For example, one could argue that pianists have a higher intelligence than violinists; as the sheet music for piano uses a treble clef and a bass clef, whereas only the treble clef is used in violin sheet music. Since pianists have to read two lines of music at the same time, some might say that they are more intelligent than other types of instrumental players. ?Is there a specific genre of music that has a greater effect on second language acquisition?? or ?Which languages are easier to learn with musical instruction??, for example one could argue that musical instruction makes learning how to speak Chinese languages easier, as Chinese languages rely heavily on specific tones and pitches in order to convey meaning. ...read more.