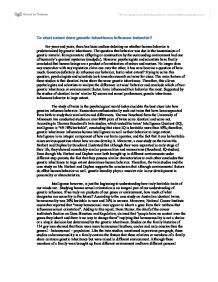 To what extent does genetic inheritance influence behavior

To what extent does genetic inheritance influence behavior? For years and years, there has been endless debating on whether human behavior is predetermined by genetic inheritance. The question that behavior was due to the transmission of genetic material from parents to offspring or construction by the surrounding environment had one of humanity's greatest mysteries (medpdia). However psychologists and scientists have finally concluded that human beings are a product of combination of nature and nurture. No longer does any researcher with any reputation claim one over the other, it has now become a question of how much. Genetics definitely do influence our behavior, but to what extent? Trying to solve this question, psychologists and scientists look towards research on twins for clues. The main feature of these studies is that identical twins share the same genetic inheritance. Therefore, this allows psychologists and scientists to analyze the difference in twins' behavior and conclude which of two: genetic inheritance or environmental factor, have influenced their behavior the most. Supported by the studies of identical twins' similar IQ scores and s****l preferences, genetic inheritance influences behavior to large extent. ...read more.

According to the case study on Australian identical twins, homosexuality was 20% heritable in men and 24% in women. Moreover, National Cancer Institute researcher reported that "many h********l men appear to inherit a gene from their mothers that influences s****l orientation". Adding to this report, Dean Hamer, the chief of the cancer institutes's Section on Gene Structure and Regulation, claimed that "people have no control over the genes they inherit and there is no way to change them" implying that homosexuality is not a choice or a simple decision but determined by the genetic inheritance. Studies on the family histories of 114 gay men showed that there were more h********l brothers, uncles and male cousins than the general - heterosexual - population. Like the twin studies, mentioned in previous paragraph, these studies on homosexuality in a family contain the feature that these relatives or members of a family share common genetic inheritance but were raised in different environment. Although these members of a family were brought up from different environment and have different personal experience, they share the common genetic inheritance which, in this case, is homosexuality. ...read more.

Experience can modify anything in our lives. Although you may be naturally impulsive or rash, years of learning how to control yourself and calm parenting may cause you to be calm and collected. It is also critical to note that although genes do affect behavior, it may not be expressed due to the environment. If genes do cause homosexuality, than in a society where homosexuality is not accepted, people would suppress and hide it. Although genes play a large role in determining our behavior, it is without a doubt that environment does as well. Overall, while human beings are product of both genetic inheritance and environmental factor, to large extent genetic inheritance influences behavior more than environmental factor does. Supported by the twins' IQ studies and homosexuality studies, it is concluded that despite the research participants, separated identical twins were raised from different environment, showed similar behavior since they share the common genetic inheritance. One of the most critical questions of our time, discerning the human mind's behaviors is only the gateway to unlock new potentials in humans or curing psychological illnesses. It will still take years of learning for us to truly decode how much of one's brain in influenced by nurture or nature. ...read more.