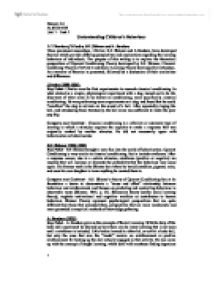 Understanding Children's Behaviour 1.1 Theories of I.Pavlov, BF. Skinner and A. Bandura Three prominent researchers, I.Pavlov, B.F. Skinner and A.Bandura, have developed theories which provide differing perspectives and explanations regarding the learning behaviour of individuals. The purpose of this writing is to explore the theoretical perspectives of Operant Conditioning Theory developed by B.F. Skinner, Classical Conditiong Theory of I.Pavlov and Social Learning Theory developed by A.Bandura. An overview of theories is presented, followed by a discussion of their similarities and differences. I.Pavlov (1849-1936) Key Point- I.Pavlov was the first experimenter to research classical conditioning. In what started as a simple, physiological experiment with a dog, turned out to be the discovery of what came to be known as conditioning, more specifically, classical conditioning. He was performing some experiments on a dog, and found that he could "condition" the dog to salivate on the sound of a bell. After repeatedly ringing the bell, and introducing food. Eventually, the bell alone was sufficient to make the poor pup drip. Compare and Contrast - Classical conditioning is a reflexive or automatic type of learning in which a stimulus acquires the capacity to evoke a response that was originally evoked by another stimulus. He did not necessarily agree with behaviourism or behaviourists B.F. Skinner (1904-1990) Key Point - B.F. Skinner brought a new face into the world of behaviourism. Operant Conditioning is very similar to classical conditioning. But in include reinforces. ...read more.

Twin studies indicates moderate genetic influence, heritability estimates for most traits are about 40% and are not influenced by the environmental factors shared by twins. The estimated heritability for the personality measures were much lower than those obtained in studies of identical and fraternal twins, which suggests that twin studies have exaggerated the degree of genetic variation in personality. Behaviour genetics studies of individual's personality make one thing abundantly clear: genes are important, and unique environment is important, but shared environment is not important at all (Eysenck, 2000). This conclusion could be devastating to theories such as psychoanalysis that place a premium on how parents treat their children (assuming that parents tend to treat all their children alike). 1.3 Stages of development Intimate interactions from early life serve as the basis upon which relationships later in life are formed. Environmental contingencies to which individuals must adapt are rooted in these relationships. In an attempt to adapt to other people's styles of relating, one must adjust his or her own behaviours (Baldwin, 1992). Theorist Theoretical Approach Principles of the theory S. Freud (1856-1939) Psychodynamic Behaviour is controlled by unconscious urges. Three components of the mind are id, ego and super ego. J. Piaget (1896-1980) and L. Vygotsky (1896-1934) Psychosocial Personality develops in eight stages throughout a lifetime. Development is influenced through interactions with family, friends and culture. E. Erikson (1902-1994) Cognitive Qualitative changes in the way children think. ...read more.

Intimate relationships formed during infancy, childhood, adolescence, and young adulthood give rise to continuing relationships, and ultimately to individual development. These life stages are associated with richer bodies of knowledge about intimacy than any other (Nixon D, Aldwinckle M 2003) . 1.4 Maslow's Hierarchy Psychologist Abraham Maslow introduced his concept of a hierarchy of needs in his 1943 paper "A Theory of Human Motivation" and his subsequent book, Motivation and Personality. This hierarchy suggests that people are motivated to fulfil basic needs before moving on to other needs. Maslow's hierarchy of needs is most often displayed as a pyramid. The idea of using a hierarchy pyramid helps us to lay out the stages of need, starting with the base of the pyramid, which looks at physiological needs. As we work our way up the pyramid, the needs start to become more complex, and include safety needs, social needs, esteem needs, and finally, at the very top, we have self-actualization. Like Carl Rogers, Maslow emphasized the importance of self-actualization, which is a process of growing and developing as a person to achieve individual potential. Maslow believed that these needs are similar to instincts and play a major role in motivating behaviour. Physiological, security, social, and esteem needs are deficiency needs, meaning that arise due to deprivation. Satisfying these lower-level needs is important in order to avoid unpleasant feelings or consequences. Maslow termed the highest-level of the pyramid as growth needs. Growth needs do not stem from a lack of something, but rather from a desire to grow as a person. ...read more.