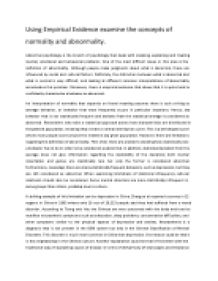 Using empirical evidence examine the concepts of normality and abnormality

﻿Using Empirical Evidence examine the concepts of normality and abnormality. Abnormal psychology is the branch of psychology that deals with studying, explaining and treating mental, emotional and behavioral problems. One of the most difficult issues in this area is the definition of abnormality. Although people make judgments about what is abnormal, these are influenced by social and cultural factors. Definitely, the distinction between what is abnormal and what is normal is very difficult, and looking at different common interpretations of abnormality accentuates this problem. Moreover, there is empirical evidence that shows that it is quite hard to confidently characterize a behavior as abnormal. An interpretation of normality that depends on literal meaning assumes there is such a thing as average behavior, or behavior that most frequently occurs in particular situations. Hence, any behavior that is not statistically frequent and deviates from the statistical average is considered as abnormal. Researchers who take a statistical approach assess how characteristics are distributed in the general population, meaning they create a normal distribution curve. This is a bell shaped curve where most people score around the middle in any given population. However, there are limitations regarding this definition of abnormality. First of all, there are problems deciding how statistically rare a behavior has to be in order to be considered as abnormal. In addition, statistical deviation from the average does not give information regarding the desirability of the deviation; both mental retardation and genius are statistically rare but only the former is considered abnormal. ...read more.

They created a complex interview called the life events and difficulties scale (LEDS). A group of 539 women in Camberwell, London were interviewed using LEDS aimed to uncover stressful events in the previous years as well as childhood events. Events were rated by a many blind researchers. They found that both recent high levels of stress and having suffered a stressful childhood event left people particularly vulnerable to depression. In the previous year, 37 of them (8 per cent of the total) had become clinically depressed. Of these, 33 (almost 90 per cent) had suffered an adverse life event. Three of the four factors that had the strongest associations with depression involved recent levels of stress. These were: lack of an intimate relationship, lack of paid employment, and the presence of three of more children in the home. However, childhood events were also important, especially the death of the mother before the age of 11. The study by Brown and Harris does not establish cause and effect relationship (correlation) and it is mainly a qualitative research. In other words it examines the meaning of participants? actions and words. In addition, the sample is non-representative since it is a purposive sampling, and therefore it is difficult to generalize. On the other hand, theoretical generalizations can be made and new theories can emerge that potentially can be generalized. Moreover, a significant problem of this study is memory distortions. Probably, some participants do not remember well some events from their childhood. ...read more.

All were forced to admit to having a mental illness and agree to take antipsychotic drugs as a condition of their release. The second part involved asking staff at a psychiatric hospital to detect non-existent "fake" patients during a 3 month period. No fake patients were sent, yet 41 real patients were judged with great confidence to be pseudo by at least one member of staff. The staff falsely identified large numbers of ordinary patients as impostors. The study concluded, "It is clear that we cannot distinguish the sane from the insane in psychiatric hospitals" and also illustrated the dangers of dehumanization and labeling in psychiatric institutions. Therefore, this study is a very strong evidence that is very difficult to distinguish normal from abnormal. This study had an enormous impact in psychiatry. It sparked off a discussion and revision of diagnostic procedures as well as discussion of the consequences of diagnosis for patients. The development of diagnostic manuals has increased validity and reliability. The method used raises ethical issues but it was justified since the results provided evidence of problems in diagnosis which could benefit others. There is strong deception and there were also serious ethical issues in the follow-up study since the staff thought that impostors would present, but they were real patients and may have not received the treatment they needed. In conclusion, it is extremely difficult to precisely explain what an abnormal behavior is. However, there are diagnostic symptoms available to mental health practitioners that allow them to deal with the exceptions and problems of the definitions of abnormal behavior mentioned above. ...read more.