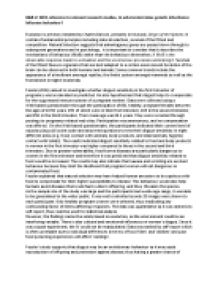 With reference to relevant research studies, to what extent does genetic inheritance influence behaviour?

﻿G&B 2: With reference to relevant research studies, to what extent does genetic inheritance influence behaviour? Evolution is a theory initiated by Charles Darwin, primarily in his book, Origin of the Species. It contains fundamental principles including natural selection, survival of the fittest and competition. Natural Selection suggests that advantageous genes are passed down through to subsequent generations and in psychology, it is important to consider that it describes the mechanisms of behaviour (MoB) rather than the behaviours themselves. A MoB is the observable response made to a situation and the unconscious processes underlying it. Survival of the fittest favours organisms that are best adapted to a certain environment.Evolution of the brain can be observed in both humans and animals. Some common trends include the appearance of a hindbrain amongst reptiles, the limbic system amongst mammals as well as the frontal lobe in higher mammals. Fessler (2006) aimed to investigate whether disgust sensitivity in the first trimester of pregnancy was as elevated as predicted. He also hypothesised that disgust helps to compensate for the suppressed immune system of a pregnant mother. Data were collected using a Web-based questionnaire through the participation of 691 healthy, pregnant females between the ages of 18-50 years. ...read more.

An online questionnaire (internet survey) was conducted by Curtis et al (2004), which aimed to research whether there were patterns within people's disgust responses. In the survey, 77,000 participants for 165 countries were shown 20 images. For each image they were asked to rank their disgust, varying from disease relevant (using images with yellow and brown tones) and disease irrelevant images (using blue visual tones). However, the number of participants had decreased to 40,000, as the other 37,000 responses were disregarded since participants were accidentally exposed to the aim of the study having an impact on the validity of the participants' responses. The findings of the survey confirmed that disgust reactions were mostly illicit for those images that did threaten the immune system. The disgust reaction also decreased with age, meaning they were comparatively high in lower ages, and women had higher disgust reactions than men. This study validated the theory that disgust is an evolutionary behavior which plays a role in the protection of the immune system and did so through a financially economic online survey, further attaining higher reliability due to the large sample size. However, confirmation bias (Hayes, 2005) ...read more.

In psychology, the focus is on the mechanisms of behaviour or the biological factors which dictate the expression of behaviour and their changes rather than the behaviours themselves. The way in which these mechanisms are investigated is outlined in the research of Fessler (2006) and Curtis et Al (2004), who focused on the mechanisms of the emotion of disgust. Their results have applications in the universal theory of emotions of both Ekman and Charles Darwin. They are especially pertinent since Edman had initially disagreed with evolutionary theories but is now convinced that there exist 6 universal emotions, one of which is disgust. The research of Curtis suggests that disgust is an emotion which has existed as a product of the human genome for centuries, serving as a shield from danger. This concept is further elaborated by Fessler who suggests that pregnant women experience disgust to protect their foetus from harmful or infected foods which may evoke disgust within the mother. The mechanism of disgust is validated by a considerable amount of evidence, leading to the conclusion that it plays an important role in human survival and has evolved over millions of years. However, the influence that the environment has on this mechanism should't be underestimated as there exist many particularities in terms of disgust for a wide range of cultures e.g.. vegemite in the Australian culture. ...read more.