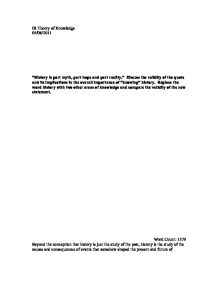 History is part myth, part hope and part reality. Discuss the validity of the quote and its implications in the overall importance of knowing history. Replace the word history with two other areas of knowledge and compare the

IB Theory of Knowledge 05/08/2011 "History is part myth, part hope and part reality." Discuss the validity of the quote and its implications in the overall importance of "knowing" history. Replace the word history with two other areas of knowledge and compare the validity of the new statement. Word Count: 1379 Beyond the conception that history is just the study of the past, history is the study of the causes and consequences of events that somehow shaped the present and future of humanity. A key part in the definition of this important area of knowledge is recognizing that History is an analysis of social degree, meaning that it deals specifically with humanity and the infinite social and cultural factors that compose it. These factors, such as religion, nationalism, wealth and others, shape the way each individual views an specific event in History, which makes the recollection of facts, testimonies and evidence itself to be somewhat unreliable. In more concrete words, we can deduce that History is an area of knowledge that is much more subjective and analytical, so it gives more space to interpretation, bias, inclusion of emotion, all variables which lead us to the question, to what extent is the study of history affected by perception, emotion and the social nature of humans? This question and the previous analysis of history make the quote "History is part myth, part hope and part reality" acquire some validity. ...read more.

However, the communists, especially Karl Marx have described Bolivar as dictator, who constantly cheated and lie to cling on to power 1. These different opinions on a historically influential person are a product of emotion and perception. Venezuelans and Latin Americans in general have this perfect image of Bolivar because of his ideas and actions that lead to our separation form Spain, but that's doesn't mean he wasn't a lying and cheating person who tried to cling on to power, because in fact, he was a dictator. Our emotions of gratitude, and our nationalistic spirit keep us from reaching the absolute truth about Bolivar. In the other hand, Karl Marx was also biased by his radicalized opinions about the bourgeoisie. He mostly bashed Bolivar because of his aristocratic origins and his authoritarian rule; Since Marx's perception of upper class people is negative, he will undermine people that fall into that category. These possible alterations of facts, caused by perception and emotion, lead to the conclusion that History is actually part true, part false, therefore part myth. Furthermore, since history is part myth, then it is part hope. These two statements are closely related to each other, because the hope component is the direct consequence of history being partially myth. The biases and the deliberate or not deliberate distortions of history give people room for doubt, whether the assessment of history is true or not. ...read more.

Reality, as well as myth and hope are part of other areas of knowledge. Take art for example. Art is a very subjective AOK, but it is always tangent to reality, since it's mostly based on the artist's personal experiences, and the real human nature. Many literary works are basically just recounts of reality, or a past event. However, most works of art, especially Literature are fiction, which is something not real. But fiction is directly related to reality through its writer or artist, who expresses concrete reasons or messages through its art, therefore, it is part myth. Finally, art is hope because of the purposes of the artist. We know that art is usually used to express a motif or message; it is a way to show opposition. Art has been used as a tool for activism and critique in recent and contemporary times, and the people the use art have the hope to make their message transcend through their art. Even though history is not the most objective area of knowledge, it is as influential as any other, because in the big picture, biases, interpretations, distortion, inclusion of emotions and others, are all part of the integral study of history, in which we do not investigate the facts of the past only, but the perspective and behavior of the different civilizations of the world towards them. So in general, History is determined to be part myth, part hope and part reality. ...read more.