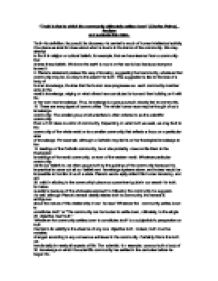 Truth is that to which the community ultimately settles down (Charles Peirce). Analyse and evaluate this claim.

"Truth is that to which the community ultimately settles down" (Charles Peirce). Analyse and evaluate this claim. Truth--its definition, its pursuit, its discovery--is central to much of human intellectual activity. One place we look for clues about what is true is in the trends of the community. We may attempt to find it in religion or cultural beliefs, for example, that we have learned from a community that shares these beliefs. We know the earth is round or that war is bad because everyone knows it. 5 Pierce's statement praises this way of knowing, suggesting that community, whatever that community may be, is a key to the search for truth. This suggestion is tied to the idea of a body of human knowledge, the idea that the human race progresses as each community member adds to the world's knowledge, relying on what others have concluded is true and then building on it with his or her own new knowledge. Thus, knowledge is a group pursuit, closely tied to community. 10 There are many types of communities. The whole human race may be thought of as a knowledge community. The smaller group of all scientists is often referred to as the scientific community. ...read more.

We must search because we expect truth to conform to certain standards before we accept it; some things are untrue regardless of the community's beliefs. The wording of the title shows that it is concerned with a single objective truth. The title's suggestion that the community must settle implies some objectivity. If truth were subjective, the 45 title would not read "ultimately settles" or "truth" (singular), but "A truth, at a given time, is what the community agrees on at that time." An objectivist interpretation of the title might read: "The community can be trusted to settle down, ultimately, to the single 'real' truth," meaning that although the community might be unable to define truth, the community's conclusions could be used as a reliable indicator of truth. The 50 implications of this statement, if it were true, would be enormous. Truth could be found simply by following the community. Anything that the community agreed upon must be true. Certainly, this is a common subconscious belief. In every culture or era, there is a reluctance to question certain core beliefs or knowledge common to all community members. We feel that this knowledge is the truth that the human race has settled on after many years of mistaken ideas. ...read more.

Pierce makes an important point in connecting truth to the consensuses that we, as a community of knowers, reach. His assertion, however, is too broad and too absolute. We do need to rely on Essay 1 Diploma Programme Theory of Knowledge Teacher Support Material: Assessment Exemplars, November 2002 5 90 knowledge communities to help us define truth and decide what we will and what we will not believe. We cannot, however rely exclusively on the leadings of a community to define our own beliefs, as the title implies. Instead, we must independently evaluate a given community before following its leads and we must consider the beliefs of other knowledge communities to keep from becoming too narrow in our understanding. We must also use our own reason and perception to 95 evaluate individual truths that the community appears to have settled on as part of our own responsibility as members of the knowledge community. If knowers never question their community's beliefs, these beliefs will never change and there will be no ultimate settlement. If we carefully avoid the dangers of trusting a community to point us to the truth, however, the leadings of the community can be a useful tool in our quest for truth. ...read more.