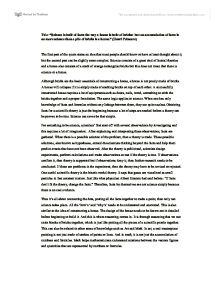 Science is built of facts the way a house is built of bricks: but an accumulation of facts is no more science than a pile of bricks is a house. (Henri Poincare)

Title: "Science is built of facts the way a house is built of bricks: but an accumulation of facts is no more science than a pile of bricks is a house." (Henri Poincare) The first part of the quote states an idea that most people should know or have at least thought about it, but the second part can be slightly more complex. Science consists of a great deal of factual theories and a house also consists of a stack of orange rectangular bricks but this does not mean that there is science or a house. Although bricks are the basic essentials of constructing a house, a house is not purely made of bricks. A house will collapse if it is simply made of stacking bricks on top of each other. A successfully constructed house requires a lot of equipments such as doors, nails, wood, something to stick the bricks together and a proper foundation. ...read more.

One useful scientific theory is the kinetic model theory. It says that gases are visualized as small particles in fast constant motion. Just like what physician Albert Einstein had said before: "If facts don't fit the theory, change the facts." Therefore, facts by themselves are not science simply because there is no real evidence. Thus it's all about connecting the dots, putting all the facts together to make a point, then only can science takes place. All the 'how's' and 'why's' needs to be understood and answered. This is also similar to the idea of constructing a house. The design of the house needs to be drawn out in detailed before beginning to build it. And this is where reasoning comes in. It is through reasoning that we can unite blocks of bricks together, which is just like putting all the pieces of a scientific puzzle together. This can also be related to other areas of knowledge such as Art and Math. ...read more.

Science to me is a system of scientific knowledge that is categorized and it has to follow scientific method to formulate theories, with a lot of experimental observations to be done in order to prove these facts. Say for example a hydrogen atom is a diatomic atom which has one proton and electron. This is simply just a fact and it does not necessary means its chemistry. But if that is change where hydrogen is necessary for hydrochloric acid in order for it to become a strong acid and take part in reactions, then its chemistry. Reasons and rational thoughts must be used to find the relationship between the facts and an idea. At first I thought that facts are just facts and as long as the facts are scientific, there is science. But it is not. Those brief concepts can make the facts specific but it's really the in depth connection that is made from all the concepts that correlate with each other. Reference: TOK book, www.sciforum.hu/file/Addy.doc www.gap-system.org/~history/Biographies/Poincare.html ?? ?? ?? ?? ...read more.