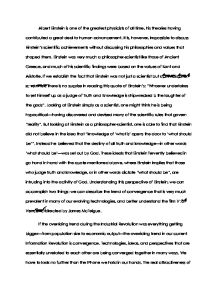 Albert Einstein. If we establish the fact that Einstein was not just a scientist but a philosopher-scientist, there is no surprise in reading this quote of Einsteins: Whoever undertakes to set himself up as a judge of Truth and Knowledge i

Albert Einstein is one of the greatest physicists of all time, his theories having contributed a great deal to human advancement. It is, however, impossible to discuss Einstein's scientific achievements without discussing his philosophies and values that shaped them. Einstein was very much a philosopher-scientist like those of Ancient Greece, and much of his scientific findings were based on the values of Kant and Aristotle. If we establish the fact that Einstein was not just a scientist but a philosopher-scientist, there is no surprise in reading this quote of Einstein's: "Whoever undertakes to set himself up as a judge of Truth and Knowledge is shipwrecked b the laughter of the gods". Looking at Einstein simply as a scientist, one might think he is being hypocritical-having discovered and devised many of the scientific rules that govern "reality". ...read more.

Technologies, ideas, and perspectives that are essentially unrelated to each other are being converged together in many ways. We have to look no further than the IPhone we hold in our hands. The real attractiveness of the IPhone lie in the fact that it is an all-in-one device-where one can browse the web, call, text, and download thousands of apps that can perform other functions as well. This integration and convergence of different technologies is a basic aspect of not just the IPhone but a variety of other hi-tech gadgets like tablets, Smart TV's, and laptops. All of these developments stem out of the very idea that Einstein discusses in his quote. True convergence cannot be achieved without equality-the idea that different technologies are equal in all aspects. Einstein outlines that there should be no hierarchy between ideas and knowledge because one idea should not dictate "what should be" over other ideas. ...read more.

In the end of the film, we see that the dictatorial government of the High Chancellor falling apart as the once repressed population becomes enlightened with new ideas proposed by the main character, V. Only when the population realizes that they can form their own opinion of "what should be" do they rise up against the government. All of these developments of the movie's plot and the overall dystopia portrayed in the film V for Vendetta go hand in hand with Einstein's values. There is no doubt that Einstein contributed a great deal to humanity. But we must be able to take into account the philosophies and values of Einstein's that shaped his scientific breakthroughs. In doing so, we find fascinating values of Einstein's that formed the basis of today's Information Revolution and the film V for Vendetta. In such ways, Einstein's contributions to humankind have been both scientific and philosophical, making him a truly well-rounded figure that will be remembered for centuries to come. ...read more.