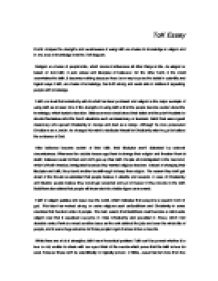 Analyse the strengths and weaknesses of using faith as a basis for knowledge in religion and in one area of knowledge from the ToK diagram.

ToK Essay Promt: Analyse the strengths and weaknesses of using faith as a basis for knowledge in religion and in one area of knowledge from the ToK diagram. Religion is a basis of people's life, which means it influences all other things in life. As religion is based on firm faith, it sets values and lifestyles of believers. On the other hand, if the doubt overwhelms the faith, it becomes nothing because there is no way to prove the belief in scientific and logical ways. Faith, as a basis of knowledge, has both strong and weak side in matters of appealing people with knowledge. Faith is a trust that somebody will do what has been promised and religion is the major example of using faith as a basis. One of the strengths of using faith is that the people become certain about the knowledge, which leads to devotion. Believers never doubt about their belief and they don't hesitate to devote themselves into the harsh situations such as missionary or terrorism. ...read more.

The main reason that Buddhism could become a nation-wide religion was that it equalized everyone in India. Christianity also prevailed in Korea, which had absolute ranks. Rank is a most sensitive issue as the rank defined the jobs and even the whole life of people, and it was a huge advance for those people to get chances to live a new life. While there are a lot of strengths, faith has a theoretical problem. Faith can't be proved whether it is true or not; unable to check with our eyes. Most of the events which prove that the faith is true do exist, however these can't be scientifically or logically proven. In Bible, Jesus has fed more than five thousand people with only five breads and two fish; which is a miracle. Some people believe in Jesus, but some might not believe this event. Solidity of faith depends on capacity of each person. The more they are certain about their faith the more they would take it seriously those events as a truth. ...read more.

Hypothesis is an observation and exploration that is believed to be the truth: not the absolute truth. In biochemistry, the chemical structure and behavior of a living thing, atomic theory is the foundation of all theories and logics. Even though the atomic theory is accepted as a formula through many scientists, it is still a hypothesis; opened possibilities to be wrong. Unless the theory is accurate, the whole arrangements of biochemistry things would be false. Faith works as a basis of knowledge in many areas such as religion and science. Faith assures people to set up devotion and firmness. After they become certain, faith builds a certain lifestyle and any harsh situations can't distract them. All those ideas become worthless unless believers get confused of other's comments that cause doubt. As faith can't be checked in eyes and by scientific and logical realms, people easily get lost. Without any assurance and determination, even trivial extensions of common ideas are hard to be accomplished. While keeping the faith for long spell is challenging, cultivation of faith is required in order to fulfill and achieve fresh and creative ideas as there is no one can trust as much as themselves do. ?? ?? ?? ?? ...read more.