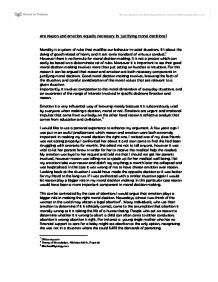 Are reason and emotion equally necessary in justifying moral decisions? Morality is a system of rules that modifies our behavior in social situations. It's about the doing of good instead of harm, and it sets some standard of virtuous conduct.1 However there is no formula for moral decision making. It is not a process which can easily be based on a determinate set of rules. Moreover it is important to see that good moral decision making involves more than just acting on hunches or intuitions. For this reason it can be argued that reason and emotion are both necessary components in justifying moral decisions. Good moral decision making involves, knowing the facts of the situation, and careful consideration of the moral values that are relevant to a given situation. Importantly, it involves compassion to the moral dimensions of everyday situations, and an awareness of the range of interests involved in specific decisions; Emotion and reason. Emotion is a very influential way of knowing merely because it is subconsciously used by everyone when making a decision, moral or not. Emotions are urgent and irrational impulses that come from our body; on the other hand reason is reflective analysis that comes from education and civilisation.2 I would like to use a personal experience to enhance my argument. ...read more.

Deductive logic can be used to make a premise. For instance killing human beings is wrong; human life begins when a baby is conceived; therefore abortion is wrong. Language has little merit in justifying whether abortion is the right moral diction. In order to asses the situation we must consider whose decision it is for a baby to be aborted. Language can be used to communicate each individual reason and emotion towards the matter at hand; however the most important point of view is not being taken into consideration; the unborn baby whose life is the one in question. Another way language can be used is through immediate assumptions; these assumptions also lead to judgmental perceptions. As soon as the word abortion is mentioned the majority associates it as being a wrong moral decision. It is a word more often than not is associated with a negative image; if this is the case then our perception tells us that abortion is wrong. History essentially exists so we can learn from mistakes and use them to make correct decisions for an improved future. We cannot know everything, but if we learn from the past we can balance our decisions, and agree upon the best solutions based on all input, information and considerations available. ...read more.

We could also use inductive logic. This process allows particular information to become more generalized. It is more informative than deduction but less certain. To do this we would look at the information over time and then make a generalized conclusion, this is sometimes less accurate as it is very general. Emotion is probably the biggest influence of the premature baby debate. A baby stereotypically has a big effect on people's emotion as it is so vulnerable. Our emotions take over and do not think of the many reasons as to why helping the baby with medical care could actually result in a lot of pain for both the baby and parents. In conclusion we cannot have a universal law to solve this debate as there are too many conflicting opinions by different cultures, countries and religions. This is the same for all moral decisions as there are so many reasons and background premises that can affect whether it is wrong or right. Individual cases need to be analyzed and looked at in detail for a moral decision to be the best one. Therefore Emotion and reason are both important components in justifying a moral decision, however each individual case needs to be examined to determine what is needed more to make the best decision, or if each components reason and emotion are equal to making a moral decision. ...read more.