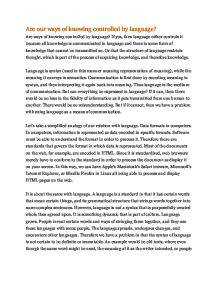 Are the WOKS controlled by language?

Are our ways of knowing controlled by language? Are ways of knowing controlled by language? If yes, then language either controls it because all knowledge is communicated in language and there is some form of knowledge that cannot be transmitted so. Or that the structure of language restricts thought, which is part of the process of acquiring knowledge, and therefore knowledge. Language is syntax (used in this manner meaning representation of meaning), while the meaning it conveys is semantics. Communication is first done by encoding meaning in syntax, and then interpreting it again back into meaning. Thus language is the medium of communication. But can everything be expressed in language? If it can, then there would be no loss in the fidelity of information as it gets transmitted from one human to another. There would be no misunderstanding. But if it cannot, then we have a problem with using language as a means of communication. Let's take a simplified analogy of our relation with language. Data formats in computers. In computers, information is represented as data encoded in specific formats. Software must be able to understand the format in order to process it. Therefore there are standards that govern the format in which data is represented. Most of the documents on the web, for example, are encoded in HTML. ...read more.

Well that simply is an idea assuming that language has to be what it always have been. Language changes because its users require it to. The change of language is simply the adaptation of it to the domain of its use. Take waves for example. Not the waves that surfers surf on, or even waves of ripples on water. Not sound waves or even light waves. Let's take quantum probability waves. A very abstract concept, surely. But we can clearly see that we have named it a wave because it has similar properties to the normal waves we see and experience. But of course quantum probability waves don't mean water waves. The word has been adapted for a new concept in physics. But how can normal words be adapted for such abstract concepts anyway? Aren't there any abstract concepts that simply cannot be expressed in language? The answer is simply, no. This is due to how the mind works, and thus also the nature of language. The mind has certain "built-in" concepts, which then can be extended in a combinatorial fashion to arrive at all possible concepts, and certainly the concepts we have now. Take the concept of the wave for example. It is made possible thanks to little concepts of space and time that we so often take for granted. ...read more.

Does the professional authority speak in the same way as the person seeking opinion or advice? * What may have been meant by the comment 'How strangely do we diminish a thing as soon as we try to express it in words'? (Maurice Maeterlinck) Language and Culture * If people speak more than one language, is what they know different in each language? Does each language provide a different framework for reality? * How is the meaning of what is said affected by silences and omissions, pace, tone of voice and bodily movement? How might these factors be influenced in turn by the social or cultural context? * What is lost in translation from one language to another? Why? * To what degree might different languages shape in their speakers different concepts of themselves and the world? What are the implications of such differences for knowledge? Linking Questions * In completing the sentence, 'I know that . . .', one is making a knowledge claim. Why is it useful or necessary to express knowledge claims? Are there Areas of Knowledge where it is expected or required? Are there Ways of Knowing where it is not? * To what extent is it possible to overcome ambiguity and vagueness in language? In what contexts might ambiguity either impede knowledge or contribute to it? Does the balance between precision and ambiguity alter from one discipline to another? Vidoes Tom and jerry Some other language ...read more.