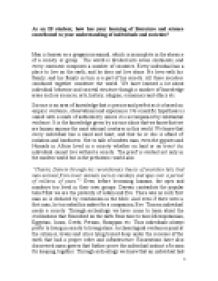 As an IB student, how has your learning of literature and science contributed to your understanding of individuals and societies?

﻿As an IB student, how has your learning of literature and science contributed to your understanding of individuals and societies? Man is known as a gregarious animal, which is incomplete in the absence of a society or group. The world is divided into seven continents, and every continent comprises a number of countries. Every individual has a place to live on the earth, and he does not live alone. He lives with his family, and his family in turn is a part of his society. All these societies combined together constitute the world. We have learned a lot about individual behavior and societal structure though a number of knowledge areas such as sciences, arts, history, religion, economics and ethics etc. Science is an area of knowledge that is precise and perfect as it is based on empiric evidence, observations and experience. No scientific hypothesis is sealed with a mark of authenticity unless it is accompanied by substantial evidence. It is the knowledge given by science alone that we know that we are human sapiens-the most rational creatures in this world. We know that every individual has a mind and heart, and that he or she is afraid of isolation and loneliness. ...read more.

Through history we have read about the disintegration of the civilizations which points at the dissent among individuals, and also at a conflict between man and his society. The reasons may have been many such as wars or natural disasters but one thing that cannot be denied is that a society can function only when there is a code of conduct and a discipline, and an individual?s challenge to the society can be detrimental to him Scientific research indicates that individuals belonging to a society share similar nature and behavior. But can science precisely tell about the unpredictable nature of a man, of an individual who has his own perceptions, logic, reason, faith and viewpoints? No, science cannot. Through psychology we know that an individual acts according to his own bent of mind, his own fears, dreams and hopes. There is no fixed pattern that governs the actions of an individual. Thus science fails to predict the behavior of a man, as man is stubborn and unpredictable by nature. An individual is not a molecule with a definite mass and definite number of atoms. Science can never know what is there in the mind of a man, and what he is going to do next. ...read more.

The people around him do not consider that he (Raskolnikov) killed the elderly pawnbroker and moneylender, Alyona Ivanovna, in order to relieve his society from a parasite only). Thus literature too serves as a mirror of the individual and society. But literature too cannot apply its exemplary power on the unpredictable man. The work of an author or a poet is his viewpoint based on his experience. . Sigmund Freud once claimed, ? A work of literature is the external expression of the author?s unconscious mind2. And it is the irony of human kind that no two individuals are alike in this vast flood of human race. Thus literature too cannot boast of having the privilege of enlightening mankind by discovering and explaining the nature and behavior of an unpredictable individual and his society. To conclude, I would like to say that although literature and science are not a panacea to our learning of individual and society yet they play a very substantial role in increasing our knowledge of them. Science and literature together have elevated us to a high standard of humanity otherwise we might still be living in the Paleolithic age, carrying stones in our hands. Word count 1612 1. www.darwins-theory-of-evolution.com 2. Wordsworth. http://www.bartleby.com/106/272.html 3. Sigmund Freud. web.olivet.edu/English/rbelcher/lit310/310PSY.htm ...read more.