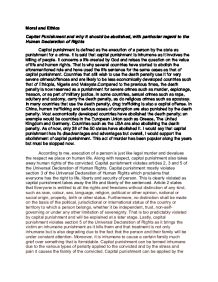 Capital Punishment and why it should be abolished, with particular regard to the Human Declaration of Rights

Moral and Ethics Capital Punishment and why it should be abolished, with particular regard to the Human Declaration of Rights Capital punishment is defined as the execution of a person by the state as punishment for a crime. It is said that capital punishment is inhumane as it involves the killing of people. It concerns a life created by God and raises the question on the value of life and human rights. That is why several countries have started to abolish the aforementioned rule and have used the life sentence for the same cases as that of capital punishment. Countries that still wish to use the death penalty use it for very severe crimes/offences and are likely to be less economically developed countries such that of Ethiopia, Nigeria and Malaysia.Compared to the previous times, the death penalty is now reserved as a punishment for severe crimes such as murder, espionage, treason, or as part of military justice. In some countries, s****l crimes such as r**e, adultery and sodomy, carry the death penalty, as do religious crimes such as apostasy. In many countries that use the death penalty, drug trafficking is also a capital offense. In China, human trafficking and serious cases of corruption are also punished by the death penalty. Most economically developed countries have abolished the death penalty; an example would be countries in the European Union such as Greece, The United Kingdom and Germany. ...read more.

Moreover, many others including myself feel the government does not have the power and role to give life or to cause death, only god does.The government has a job to take care of its citizens and not kill them. Hence, despite the popularity of capital punishment, I believe it is like legal murder and it takes away the rights and the respect of the convicted. Apart from the right to live, it has been said that criminals who have committed severe crimes cannot be rehabilitated and that death penalty is applicable for them. A number of people also feel that compared to what some criminals have done, the death penalty is humane. Some of these criminals have abused drugs, raped or even killed people; on the other hand, the system (death penalty) has never killed anyone without a reason. It is administered with great care and responsibility so that there is no chance of a person being accidentally convicted. Furthermore, the government believes that the technology used such as DNA testing and lie detectors are so advanced that the risk of a wrong execution is getting smaller each time. Apart from these matters, some governments believe that criminals who commit heinous crimes will never change their habits, making rehabilitation a waste of time and effort. That being said, I believe that capital punishment is inhumane, it has claimed many innocent lives and by using it we are ruling out the chance of rehabilitation. ...read more.

This being said, it is stated that one may administer self defense by harming others and thus it can be argued that the government has the right to kill the convicts who pose a threat to others. But despite that, I still believe capital punishment should be abolished as the government would cause grief to the family of the convicted which may be innocent. That is certainly unnecessary for the government to cause pain for a law abiding citizen. With the life sentence imposed, the criminals will be locked up behind bars in high security prisons out of reach of citizens. Furthermore, employment can be created by the supervision of the criminals. That would be essential in a country that is plagued with a high level of unemployment. To conclude, many countries are abolishing capital punishment and I am in favor of their decision to do so. Capital punishment is inhumane and at times takes lives of the innocent; it is also costly. Along with that, I believe it highly contradicts with moral values, especially in regard to deontological ethics and the Universal Declaration of Human Rights. People who support the death penalty should also modify their mindset in thinking that capital punishment is what criminals deserve. A life sentence would be a viable alternative to replace capital punishment as it has many key advantages over capital punishment, no matter what the extent of the crime is. ...read more.