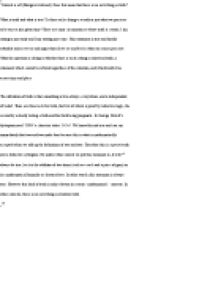 ﻿5 ?Context is all' (Margaret Atwood). Does this mean that there is no such thing as truth? What is truth and what is true? Is there such a thing as a truth or just what we perceive to be true at any given time? There are some circumstances where truth is certain. I am sitting in my study and I am writing my essay. This statement is true and hardly refutable unless we try and argue that all we see and feel is what our senses perceive. What the question is asking is whether there is such a thing as universal truth, a statement which cannot be refuted regardless of the situation, and which holds true across time and place. The definition of truth is that something is true always, everywhere and is independent of belief. There are three tests for truth, the first of which is proof by inductive logic, the second by actually testing a truth and the third being pragmatic. In George Orwell?s dystopian novel ?1984? a character states 2+2=5. We know this not true and can say immediately that two and two make four because this is what is mathematically accepted when we add up the definitions of two and two. Therefore this is a-priori truth and a deductive syllogism. No matter what context we put this statement in, it will 15 always be true, be it in the addition of two items (such as a sock and a piece of gum) ...read more.

2 This is a method of demonstrating Godel?s theorems in word form. 2 ________________ believed to have carried out genocide upon the people of bordering Armenia. The official position of the Turkish government until this day is complete denial that a massacre occurred. However, in Armenia historians tell us that thousands of innocent 45 Armenians were slaughtered by Ottoman soldiers. This demonstrates how the context changes our understanding of the truth of historical events. ?Thou shalt not kill? is a tenet that a religion with billions of followers states in its first teachings and is generally accepted not just as a piece of guidance on how to behave but as a moral absolute, and as a statement of true fact. However, ?why do we kill people 50 who are killing people to show that killing people is wrong??3 A person convicted of murder in the state of Texas is automatically eligible for the death penalty. It is generally considered unacceptable to kill, however, if the person is being punished for a crime that he has committed then the death penalty is in some countries applicable and accepted, thereby contradicting the so-called ?moral truth? put forward by religion. 55 The Iraq war has claimed hundreds of thousands of lives, mainly Iraqi civilians who have no part in the actual conflict but who were living in Baghdad when bombs started landing, or simply present in a market the day a suicide bomber struck. ...read more.

We can comprehend that if we run into a wall we will knock ourselves out. If we had neutrino brains and we had developed from neutrino ancestors, our brains would be able 85 to process the spaces between the atoms and we would in fact be able to move through walls. What we perceive is not a direct translation of the world around us. Each organism has developed from different ancestors and perceives the world to his own benefit. A monkey, Richard Dawkins claims, needs to be able to visualise a 3D world of 4 ________________ branches and trees, whereas a water skater lias no neea tor a 3d world or a perception of 90 gravity because its whole world is on the surface of a pond. The context in which the world is interpreted changes from species to species. It is convenient for humans to see colours (differentiating wave-lengths) because we live predominantly in the light, however for a bat living in darkness most of its life, it is more suitable for it to use its ears to perceive colours. The context changes the usefulness of external sensory 95 information. Evolution has enabled humans to operate successfully in the context of Dawkins? middle world. We exist in a world where we must make sense of situations as we find them. That may involve making judgements and evaluating historical, artistic, mathematical, religious and moral information. I believe that there is no such thing as absolute truth, and that 100 Margaret Atwood was right when she said ?context is all?. ...read more.