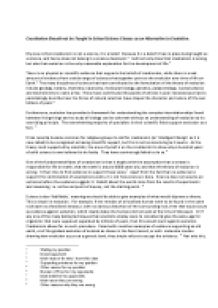 Deconstructive Essay - Creationism Should not be Taught in School Science Classes as an Alternative to Evolution.

﻿Creationism Should not be Taught in School Science Classes as an Alternative to Evolution. My view is that creationism is not a science, it is a belief. Because it is a belief it has no place being taught as a science, and hence does not belong in a science classroom.[1] I will not only show that creationism is wrong, but also that evolution is the only reasonable explanation for the development of life.[2] There is no physical or scientific evidence that supports the beliefs of creationism, while there is a vast amount of evidence from a wide range of sciences that together point to the evolution over time of life on Earth.[3] The many disciplines of science that have contributed to the formulation of the theory of evolution include geology, botany, chemistry, taxonomy, molecular biology, genetics, palaeontology, nuclear physics and biochemistry to name a few. These have contributed thousands of articles in peer-reviewed journals to painstakingly describe how the forces of natural selection have shaped the character and nature ...read more.

For example, if the remains of a fossilised human were to be found in the same rock layer as a fossilised dinosaur, with no obvious distortion of the surrounding rock, then that would count as evidence against evolution, which clearly states the humans did not exist at the time of dinosaurs. Or if any one of the many dating techniques that scientists employ were to consistently give the same age for organisms that were supposed separated by millions of years, then this would count against evolution. Creationism allows for no such procedure. Faced with countless examples of evidence supporting an old earth, or of the gradual evolution of animals as shown in the fossil record, or with molecular studies showing how evolution occurs at a genetic level, they simple refuse to accept the evidence. [9] Not only this, but creationists assume that if they cast doubt on evolution that they must be right by default. ...read more.

Nor does it mirror the scientific process in any way. As such, the notion that it be given equal time in a ?science? focused educational environment (or, indeed, any educational environment) is simply ludicrous[18]. It should not be taught period. Creationism is an affront against both science and religion.[19] ________________ [1] Stating my position. [2] Direct argument [3] Main reason for why I have this view [4] Supporting evidence for my position [5] Other resons for my posiiton [6] Burden of Proof on my opponents [7] Main belief of my opponents [8] Main reson they are wrong [9] Other reasons why they are wrong [10] Demonstrates the problem of a direct attack in this context [11] Ridicule of my opponent?s view [12] Attributing the non rational argument of ?invincible ignorance? to my opponents [13] Demonstrating that my opponents argument is not related to the point at issue. [14] Rhetorical question [15] Black & White fallacy [16] Emotive language [17] Circular argument. [18] Ridicule [19] Emotive language ...read more.