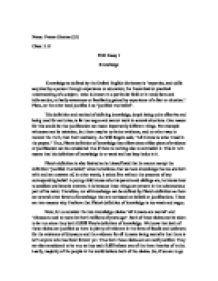 Name: Pranav Sharma (25) Class: 3.15 POD Essay 1 Knowledge Knowledge as defined by the Oxford English dictionary is "expertise, and skills acquired by a person through experience or education; the theoretical or practical understanding of a subject; what is known in a particular field or in total; facts and information; or lastly awareness or familiarity gained by experience of a fact or situation." Plato, on the other hand justifies it as "justified true belief". This definition and method of defining knowledge, despit being quite effective and being used for centuries, is far too vague and cannot work in several situations. One reason for this would be that justification can mean importantly different things. ...read more.

Plato's definition is also limited as he himself said that he cannot accept the definition "justified true belief," since he believes that we have knowledge that we are born with and are unaware of, in other words, it exists first without the presence of any corresponding belief. A young child knows who his parents and siblings are, he knows how to swallow and breathe etcetera. It is because these things are present in the subconscious part of his mind. Therefore, not all knowledge can be defined by Plato's definition as there are several other form's of knowledge that are not based on beliefs or justifications. These are two reasons why I believe that Platos' definition of knowledge is too weak and vague. ...read more.

They are also considered to be true as they each fulfill atleast one of the three theories of truths. Lastly, majority of the people in the world believe both of the claims. So, if we are to go with Plato's definition o knowledge, we know that these claims are true. However, there is still a lot of skepticism in the world considering whether dinosaurs really exist and such, so we cannot be entirely sure of whether or not these claims are true. If there is contradictary evidence then the claim will have to be reviewed. To sum it up, I believe that knowledge cannot be defined by one single term or one definition but it is supposed to be considered on a case to case basis. Different type of problems need to have different ways of deciding whether or not something is true. ...read more.