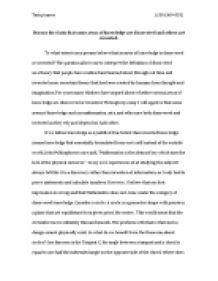 Discuss the claim that some areas of knowledge are discovered and others are invented.

﻿Tariq Ameer (001369-033) Discuss the claim that some areas of knowledge are discovered and others are invented. To what extent can a person believe that an area of knowledge is discovered or invented? The question allows me to interpret the definition of discovered as a theory that people have realized and learned about through out time and invented as an uncertain theory that has been created by humans from thought and imagination. For years many thinkers have argued about whether various areas of knowledge are discovered or invented. Through my essay I will approve that some areas of knowledge such as mathematics, arts, and ethics are both discovered and invented as they rely and depend on each other. If we define knowledge as a justified true belief, then invented knowledge means knowledge that essentially formulated from one?s self instead of the outside world. John Polkinghorne once said, ?Mathematics is the abstract key which turn the lock of the physical universe.? In my own experiences of at studying the subject I always felt like it is a discovery rather than invention of information, as I only had to prove statements and calculate numbers. However, I believe that my first impression is wrong and that Mathematics does not come under the category of discovered knowledge. ...read more.

It could be argued that Pythagoras and his students discovered some sort of triangle shape in the real world and then invented the theorem, or invented the theorem and then discovered how it applies to the real world. This shows that invention and discovery of knowledge rely and depend on each other. A fellow classmate argued that mathematics is discovered because you just can?t invent such things as ?1 + 1 = 2? because ?it just is.? Well it is on the contrary, ?1 + 1 = 2? is statement that is invented, because the numbers and symbols used are concepts created in the mind. On the other hand, ?by picking up an orange and then picking up another orange, you will end up with two oranges?, is discovered because it is based on observation and experience rather than pure logic. We cannot observe ?2?, but we can observe objects with ?2? as a property such as a pair of chairs. So unless we are willing to accept Plato?s theory, we have to accept that ?1 + 1 = 2? is an invented knowledge. You could ?invent? a new formal mathematical system in which ?1 + 1 = 5? but unless you discover a way in which the system applies to the world we live in, nobody will accept it as it will be considered useless. ...read more.

The final area of knowledge I shall examine is ethics. Ethics and morals are an area of knowledge that relate to each individual personally. So where do morals and ethics come from? Are you born as a ?good? person? Personally, I have formed my ethical values through my experiences as I grow older. For instance my friends, family members, and the media have all influenced me to act in a certain way that is considered ?correct? in my society. In this example ethics, as an area of knowledge, is discovered by each individual. It can also be argued that ethics is invented. When a person is told to act in a certain way from a young age, that person did not discover ethics by himself. The ethics have been passed on from generation to generation, thus being invented by people to co-operate with each other. If people discovered in themselves the idea of being polite then it could mean that this idea existed in the mind of a higher being. In conclusion, examining the nature of the areas of knowledge has showed that our assumptions about them may be completely false. Whether the area of knowledge is invented, discovered, or both, overtime is can be appreciated and understood. We also have to accept that invention and discovery rely on each other and at times create each other. Word Count: 1284 ...read more.