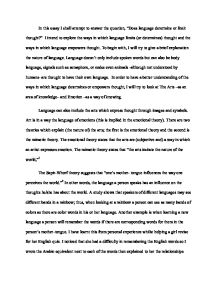 Does language determine or limit thought?

In this essay I shall attempt to answer the question, "Does language determine or limit thought?" I intend to explore the ways in which language limits (or determines) thought and the ways in which language empowers thought. To begin with, I will try to give a brief explanation the nature of language. Language doesn't only include spoken words but can also be body language, signals such as semaphore, or codes even animals -although not understood by humans- are thought to have their own language. In order to have a better understanding of the ways in which language determines or empowers thought, I will try to look at The Arts -as an area of knowledge- and Emotion -as a way of knowing. Language can also include the arts which express thought through images and symbols. Art is in a way the language of emotions (this is implied in the emotional theory). There are two theories which explain (the nature of) the arts; the first is the emotional theory and the second is the mimetic theory. The emotional theory states that the arts are (subjective and) a way in which an artist expresses emotion. The mimetic theory states that "the arts imitate the nature of the world,"1 The Sapir-Whorf theory suggests that "one's mother- tongue influences the way one perceives the world."2 In other words, the language a person speaks has an influence on the thoughts he/she has about the world. ...read more.

The ability to express a thought is dependent on our skill in the use of language; mainly our vocabulary but not all ideas and thoughts can be expressed easily; such as when describing emotions. Emotion is a way of knowing which is classified into four groups; they are: * Instinctive emotions: which include; anger, love, or joy * Social emotions: which include; guilt, shame, or jealousy * Inward-looking emotions: or emotions where we are "drawn into ourselves". Which include; fear or grief * Outward-looking emotions: or emotions where we are "drawn out of ourselves". Which include; wonder or awe For example, when a person is trying to explain the way he or she feels on a rollercoaster at the height of a big drop. The person could say I'm scared, nervous, or excited, but these more abstract emotions can't really be explained through language; it doesn't really encompass the whole picture, therein lies a knowledge issue.This is similar to trying to explain something you feel strongly about; you are likely to find it difficult to find the right words and sometimes it might not make sense, like when Dan Quayle said, "verbosity leads to unclear, inarticulate things."9 I have found this to be true during a theory of knowledge class; the teacher asked the class to define a few words one of which was the word "love". ...read more.

An example of irony is when someone says "what lovely weather!" whilst there is a storm. Another knowledge issue arises when a problem is renamed in the belief that it has been solved. For example, if someone says "that painting is extraordinary" and another asks, "why do you find it extraordinary?" -the first problem lies as the (first) person attempts to explain why he/she finds the painting extraordinary- then the first person replies, "because it has hidden deep thoughts and emotions" - the problem is not solved; in fact it is renamed and becomes "what does the person find extraordinary about the deep thoughts and emotions. After exploring the area of knowledge; The Arts and the way of knowing; Emotion I have come up with a comment about my question. I believe that although there seems to be more points for the idea that language determines thought, the ways in which language empower thought outweigh the ways in which language limits thought and that language doesn't only allow expression of thought but is a tool in thinking and a way of knowing. A limitation in my essay is that I didn't explore the forms of language in my examples but used the form of language involving spoken words. However, I did explore the idea that there are different forms of language. ?? ?? ?? ?? ...read more.