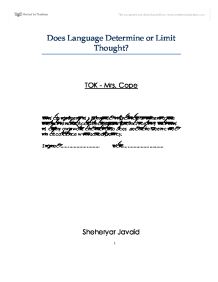 Does Language Determine or Limit Thought?

Does Language Determine or Limit Thought? TOK - Mrs. Cope This assignment is submitted in partial fulfillment of the International Baccalaureate/BISJ Diploma. I certify that this is all my own work, and that all sources used have been cited in accordance with school policy. Signed ........................... Date............................ Sheheryar Javaid Life is divided between things that can make you feel, emotions, and things that make you think, thoughts.1 Language is the primary way for humans to express these feelings of thought and emotion. Language can be any form of communication that has a specific meaning which is conveyed to other people.2 With this, we are able to share ideas, knowledge, and skills. But can we express these feelings without language? If so, how can we? If not, then does language fully determine thought and is it the only factor which determines it? This essay will evaluate and answer these knowledge issues to resolve the extent to which language determines or limits thought. Verbal and written communications are often considered as the main methods to express language. However, facial expressions, eye contact, sign language and many others are also forms of language, non-verbal language.3 But many different questions arise regarding these other forms of communication. Are there different limits on thought using the other forms of communication? Also, are the same factors that limit thought applied to more than one form of communication? ...read more.

The theory suggests that if you do not have to words to convey your feeling, then you cannot experience the feeling at all. But, if we do not have the words to express thoughts, then this means that thought comes first. Then if language cannot express all feelings and thoughts, are there others ways to express thought, such as emotion in this case? I believe sometimes spoken words are not complex enough to express the true feelings of the mind. If so, what are the other Ways of Knowing to express thought? Or is language the only way to express thoughts? The other three Ways of Knowing are Emotion, Reason and Perception. Reason and perception can only affect thought through language. It is the medium which allows us to think of these. However, emotion is a feeling that can directly affect thought, without the use of language. We could usually describe emotions within a few words. If someone was told to describe their feelings after being proposed to, they might say their happy and excited. But these words are not enough to describe the whole feeling which is felt by the person, thus language at times might not be enough to fully describe our emotions. But then does the amount in which you can express your emotions depend on your vocabulary and creativeness? ...read more.

There are many other languages that are used (eg: Handspeak). Ambiguity is the doubtfulness, particularly as to the meaning of language, arising from a word having more than one meaning and vagueness is when words are not expressed clearly. There are many different kinds of language, written, verbal.... Many techniques that can be used to limit language for each particular type of language: Written --> ambiguity Oral --> sarcasm and irony 1 Petenelli M. 27th Dec. 2009 'The Psychology Of Emotions, Feelings and Thoughts' <http://cnx.org/content/m14358/latest> (accessed 29th of December, 2009) 2 O'Neil, D. 31st Aug. 06 What is Language? <http://anthro.palomar.edu/language/language_2.htm> (accessed 4th Jan. 2010) 3 N.d. Introduction in non-verbal communication <http://www.fhsu.edu/~zhrepic/Teaching/GenEducation/nonverbcom/nonverbcom.htm> (accessed 8th of December, 2009) 4 Van de Lagemaat, R., 2005, Theory of Knowledge, Volume 5, Cambridge, United Kingdom, pages 55 - 8 5 Savage, K. 7th Oct. 07, The Silent Treatment - What You Are Saying By Not Saying Anything At All <http://www.kensavage.com/archives/silent-treatment> (accessed 4th Jan. 2010) 6 Hendri, M. n.d History of Sign Language <http://library.thinkquest.org/J002931/dev.thinkquest.org/history_of_sign_language.htm> (accessed 31st Dec. 09) 7 Ferraro, V., Palmer, K. C. n.d., Difference between oral and written communication <http://www.mtholyoke.edu/acad/intrel/speech/differences.htm> (accessed 9th of December, 2009) 8 Pleo, J. n.d. Dolphins Echolocation <http://dolphins-and-more.com/dolphins-echolocation.html> (accessed 31st Dec. 09) 9 Chandler D. 1994 The Sapir Whorf Hypothesis <http://www.aber.ac.uk/media/Documents/short/whorf.html> (accessed 31st Dec. 2009) 10 Martland, T. R. N.d. On the 'Limits of my language means the limit on my world' <http://www.jstor.org/pss/20126734> (accessed 31st Dec. 09) 11 Green, A. 21st July. 2006 Sapir and Whorf Linguistic Theory <http://anthologyoi.com/anthropology/linguistics/sapir-and-whorf-linguistic-theory.html> (accessed 31st Dec. 2009) ?? ?? ?? ?? 1 ...read more.