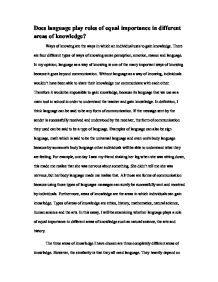 Does language play roles of equal importance in different areas of knowledge? Ways of knowing are the ways in which an individual uses to gain knowledge. There are four different types of ways of knowing sense perception, emotion, reason and language. In my opinion, language as a way of knowing is one of the many important ways of knowing because it goes beyond communication. Without language as a way of knowing, individuals wouldn't have been able to share their knowledge nor communicate with each other. Therefore it would be impossible to gain knowledge, because its language that we use as a main tool in school in order to understand the teacher and gain knowledge. In definition, I think language can be said to be any form of communication. If the message sent by the sender is successfully received and understood by the receiver, the form of communication they used can be said to be a type of language. Examples of language can also be sign language, math which is said to be the universal language and even one's body language because by someone's body language other individuals will be able to understand what they are feeling. ...read more.

Language is the only way history can be passed down to generations. When people who were involved in the event die, the event will be eventually forgotten if knowledge and information about the event was not noted down in a diary. Therefore, individuals from the new generation would not have been able to understand and analyse the event or even know the event even occurred in the first place. However, another aspect I'm going to look at of language is how it's being used in these different areas of knowledge to analyse it plays equal roles in these areas of knowledge. In natural science, language is used as a tool to share ideas, knowledge, discoveries, research from one scientist to another. For example, when Newton discovered gravity, without language we wouldn't have known anything about it. It was because of language that he was able to share his discoveries with other scientists, or else scientists from all over the world still might be trying to discover the reason why when an object is dropped it always fall to the ground. Another way language is used in natural science is that it's used to make sure the discoveries of different scientist are passed on to generations even after the scientist's death. ...read more.

In the arts, the problem with language which should be considered is that there are so many words in the English language which has double meanings and there are two different words which mean the same. The point being, since the arts are a way of expressing their feelings, poems and songs with these ambiguous words can mislead the receiver. For example, if a poem or a song contained the word "bangs" which could either mean small explosions or lock of hair in the forehead. If the song or poem was about hair, this ambiguous word can mislead the receiver into thinking the song or poem is about small explosions. In conclusion, we can see that language is quite important is all three areas of knowledge. However, when analysing if language plays roles of equal importance in these areas of knowledge we also have to consider that its impossible to quantify whether language plays equal roles and we also have to look at how the language is being used in these areas of knowledge. I conclude, that language does play an important role in the three areas of knowledge but if we analyse closely we can see that what language is being used for is different the three areas of knowledge. ?? ?? ?? ?? ...read more.