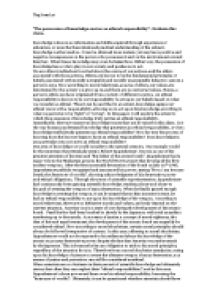 Does the possession of knowledge carry an ethical responsibility?

﻿Ting Yuen Lai ?The possession of knowledge carries an ethical responsibility?. Evaluate this claim. Knowledge is known as information and skills acquired through experience or education, or even the theoretical and practical understanding of the subject. Knowledge is all around us. It can be obtained in an instant, yet may have positive and negative consequences on the person who possesses it and on the environment around him/her. Other times, knowledge may even be hazardous. Either way, the possession of knowledge has a role to play in our society, and pushes us to act. We are often troubled and worried about the course of our actions, and the ethics associated with those actions. Ethics are known to be the fundamental principles or beliefs associated with morally acceptable and morally unacceptable behavior, seen in a person?s eyes. Now according to moral relativism, an area of ethics, our values are determined by the society we grow up in and there are no universal values. Hence, a person?s ethics can have originated from a variety of different sources. An ethical responsibility is known to be our responsibility to act upon our beliefs based on what we consider as ethical. ...read more.

Now according to moral absolutism, certain moral principles should always be followed irrespective of context. In this case, adhering to moral absolutism, Oppenheimer would not be expected to his utilize and abuse his knowledge of the atomic to possess destructive power, despite the fact that America was under attack by the Japanese. This is because he has an obligation to stick to his moral principles, regardless of the situation he is in. Therefore from a moral absolutist standpoint, acting upon his knowledge of science to create the ultimate weapon of mass destruction, as a means of justice and protection, can still be considered unethical. Often scientists are so obstinate in their pursuit of scientific knowledge and ultimately status, that often they can neglect their ?ethical responsibilities?, and in this case, Oppenheimer?s chose power and fame over his ethical responsibility, becoming the ?destroyer of worlds?. Ultimately, it can be questioned whether scientists should have an ethical responsibility in the pursuit of knowledge, or whether the knowledge itself they acquire equips them with an ethical responsibility. Similarly to the role of the scientist, the role of a doctor can be another example of the natural sciences as a way of knowing. ...read more.

Hence, there are often situations where attaining knowledge places the person at an inescapable position, where his/her decisions will inevitably be considered as unethical. A counter claim in the human sciences would involve me witnessing two people holding hands, in which through sense perception, caused me to assume that they were a couple. It was until later that I found out that the male was in fact in a relationship with another female. My knowledge of them holding hands did not hold me at any obligation, as I was oblivious to the full truth and was unaware that the male was cheating on his girlfriend. Hence in this case, knowledge here did not possess any ethical responsibility whatsoever. In conclusion, most often full knowledge to a particular issue does indeed possess an ethical responsibility. Gaining full knowledge immediately involves the person in the situation, and he/she is often judged through his/her actions based on his/her newly attained knowledge. However, only possessing partial knowledge of a certain subject is insufficient to subject one to take ethical actions and decisions, as he/she is unaware of the full situation and shouldn?t be required to ?correct? the ?wrong?. It can almost be said that the person who is oblivious to the whole situation is considered ?innocent?, while the person fully aware must fulfill his/her ethical responsibility to remain ?innocent?. ...read more.