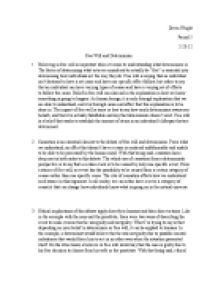 Free Will and Determinism

﻿Devin Wright Period 5 2-23-12 Free Will and Determinism 1. Believing in free will is important when it comes to understanding what determinism is. The factor of determining what acts are considered to actually be ?free? is essential into determining how individuals act the way they do. Free will is saying that an individual isn?t destined to have a set cause and have one specific effect follow, but rather to say that an individual can have varying types of causes and have a varying set of effects to follow the cause. Belief in free will can also aid in the explanation in how we know something is going to happen. As human beings, it is only through explanation that we are able to understand, and it is through cause and effect that this explanation is to be done in. The impact of free will is more or less to say how much determinism sways our beliefs, and that it is actually falsifiable and say that determinism doesn?t exist. Free will is a belief that works to establish the amount of items in an individual?s lifespan that are determined. ...read more.

1. Compatibilism is the way of saying that freedon and determinism are not genuinely incompatible. In other words, free will and determinism can be altered to suit the individuals wants or needs. An example of this is an individual who starves himself as part of a hunger strike. Knowing that he has the ability and free will to eat, he decides not to in order to protest whatever is going on by not eating. This shows that humans can alter their free will to go against determinism in order to receive items that they want or need. Another example mentioned in the article is the young child who ceases from doing other activities in order to get their homework done. Instead of exercising their free will and freedom by doing what they desire, they alter it in order to accomplish another task. In the words of Kant, individuals make different approaches to the world depending on practical or theoretical interests 1. In terms of the items that influence the decisions that we make, I see the environment as a bigger and more influential factor. ...read more.

In the instance mentioned above, the action was caused by an internal force, saying that this was completely determined, and therefore means a determined behavior is suggested. In instances where no opposition is present, free will then become the ability to specify a certain category of cause, and show a specific behavior as a result. 1. I decided that it is important to leave little Hitler the way that he was and let the time go by. By changing something as radical and widespread as the Holocaust, there is no telling what items could result. From my understanding, there actually were some good things that came out of the Holocaust, like an increased sense of community and nationalism. Additionally, there is the overwhelming possibility that there could have resulted in more problems and a worse epidemic if Hitler ceased to exist. What I?m trying to say is that if we were to change history by cutting the head off of the snake, nobody knows if a bigger and worse snake is to come and take over. By leaving young Hitler the way he is and letting history run its path, we are keeping the world the same way it is now and preventing the possibility of a worse event occurring. ...read more.