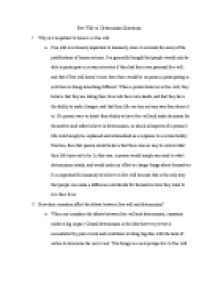 Free Will vs Determinism Questions

﻿Free Will vs. Determinism Questions 1. Why is it important to believe in free will 1. Free will is extremely important to humanity, since it accounts for many of the justifications of human actions. It is generally thought that people would only be able to participate in certain activities if they had their own personal free will, and that if free will doesn?t exist, then there would be no point in participating in activities or doing something different. When a person believes in free will, they believe that they are taking their lives into their own hands, and that they have the ability to make changes, and that their life can turn out any way they desire it to. If a person were to doubt their ability to have free will and make decisions for themselves and rather believe in determinism, in which all aspects of a person?s life could simply be explained and rationalized as a response to a certain bodily function, then that person would believe that there was no way to control what their life turns out to be. ...read more.

Through determinism, ethics and morality are pretty much ignored since it seems that an individual?s morality and ethical opinions have no influence on their actions. 1. What is compatibilism and what are the implications for understanding human behavior if you adopt that view of the debate? 1. Compatibilism is the belief that free will and determinism are compatible ideas, and that it is possible to believe both without being logically inconsistent. Compatibilists believe freedom can be present or absent in situation for reasons that have nothing to do with metaphysics. They also define free will as freedom to act according to one's determined motives without hindrance from other individuals. Because free will is typically taken to be a necessary condition of moral responsibility, compatibilism is sometimes expressed in terms of a compatibility between moral responsibility and determinism. The Compatibilist might argue that determinism is not just compatible with any good definition of free will, but actually necessary. ...read more.

The implications of these research findings would be that there would be an increased support for determinism, and in turn an increased disregard for personal morality, since individuals would feel that there is no choices they would be able to make to affect their lives: everything happens out of their control. In regards to the control of human behavior, people would begin to lose faith in their ability to control any human actions at all. 1. What would you do to Adolf Hitler as a child? 1. Personally, I would take the route of showing all the evidence of the Holocaust to Hitler?s parents, and have them take it from there. Whether they choose to believe me or not, is their choice, but I would much rather take that route than kill Hitler, simply because as a child, he still has the potential to grow up and live a normal, happy life instead of being doomed to becoming the awful person that he was in reality. ...read more.