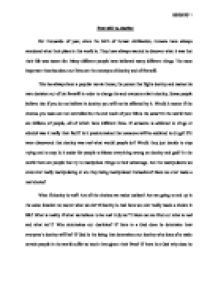 Freewill vs Destiny and Science vs Religion essays

Free-will vs. destiny For thousands of year, since the birth of human civilization, humans have always wondered what their place in this world is. They have always wanted to discover what it was that their life was meant for. Many different people have believed many different things. The most important theories about our lives are the concepts of destiny and of freewill. This has always been a popular movie theme; the person that fights destiny and makes his own decision out of his freewill in order to change his and everyone else's destiny. Some people believe that if you do not believe in destiny you will not be affected by it. Would it matter if the choices you make are not controlled but the end result of your life is the same? In the world there are billions of people, all of which have different lives. If someone is addicted to drugs or alcohol was it really their fault? ...read more.

Even if we diverge from the path we were destined to follow, will it have any effect on the way things end for us? If destined what is real? Do we really have a choice in anything or are we just viewing as things occur to our bodies? If we have no choice what is the point of life? Will I come up with anymore questions? Am I destined to come up with more questions? Would it ever be possible to determine someone's destiny? If this were to happen what would be the point to life? Has there ever been a point to life? Religion and Science Since the beginning of human civilization people have wondered how it was that they got to where they were. Humans have wanted to know where reality came from and what truly is real. There have always been two different ways to try and explain how everything began. ...read more.

was who is responsible for the loss of life; the doctor or the mother? With abortion comes the possible use of stem cells. What should be done with them the stem cells? I believe that the cells are already dead and should be used to save other people's lives. But there are others that believe they shouldn't use stem cells to save people, because they are really mean people themselves (just saying). Another issue faced in this topic is can one exist without the other. Of course one can but should it? I have met many different doctors, and most of them believe that certain things should be explained scientifically while they still remain religious. This has made me wonder about one thing: Can religion be proven scientifically? I once heard that we are reaching the point of technological advancement where we will be able to determine if there truly is a God. What would happen if this was done? Should the religious people be hypocrites; after bashing science for so long just accept this scientific discovery when it benefits them. ?? ?? ?? ?? 05/25/2011 ...read more.