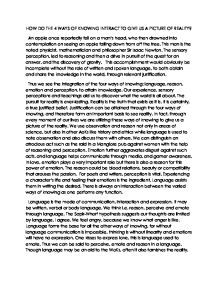 How do the 4 WOKS interact to give a picture of a reality?

HOW DO THE 4 WAYS OF KNOWING INTERACT TO GIVE US A PICTURE OF REALITY? An apple once reportedly fell on a man's head, who then drowned into contemplation on seeing an apple falling down from off the tree. This man is the noted physicist, mathematician and philosopher Sir Isaac Newton. The sensory perception, led to reasoning and then a drive in pursuit of the quest for an answer, and the discovery of gravity. This accomplishment would obviously be incomplete without the role of written and spoken language, to both obtain and share the knowledge in the world, through relevant justification. Thus we see the integration of the four ways of knowing; language, reason, emotion and perception, to attain knowledge. Our experience, sensory perceptions and teachings aid us to discover what the world is all about. The pursuit for reality is ever-lasting. Reality is the truth that exists as it is. It is certainty, a true justified belief. Justification can be attained through the four ways of knowing, and therefore form an important basis to see reality. In fact, through every moment of our lives we are utilizing these ways of knowing to give us a picture of the reality. ...read more.

Thus such a stereotype cropped up by what was perceived by a few colonizers. But the induced reasoning had negative connotations as the world proved to give birth to scholarly 'blacks' and 'browns' namely Rabindranath Tagore, Aryabhatta who invented the zero, Sir Martin Luther and even the present most powerful man in the world President Barack Obama. Humans think, feel, love, hate, express, envy. But this is as a result of a particular reason. A kind act by a kith may lead one to express gratitude. Dedication and drive to unearth answers leads to questioning. Historians on seeing ancient coins, reason out the era of their origins through methods like carbon-dating. These coins then go on to reveal economic conditions prevailing in the era as well as their progress, trade and advancement. As a student in a school, I realize that love and interest in a subject is very important to learn what is being taught. To reason the teachings, invariably gives a clear picture to the truth. All this can be done only if one is genuinely interested in the truth. "We think and live in one world; we live and feel in another." ...read more.

The truth can be tested through coherence, pragmatism, correspondence and consensus. For example, one could show how the binomial theorem works through mathematical symbols. We can question a claim in mathematics, but we will then soon see that the justification for that claim will be a stunningly beautiful rock-solid proof hard to dispute because of the axioms on which it is based. Logic, pragmatism and coherence contribute to prove the binomaial theorem. A baby is largely inhibited to reason. Yet he can express through body language his emotion, crying for hurt or howling for hunger. For a baby the world is according to his sensory perception. Yet as he grows older and more aware, the picture of reality clears. Thus we can deduce the importance of integration of the 4 ways of knowing in order to get a picture of reality. Just like it is impossible to study certain subjects without making direct reference to others, we cannot know the truth without making a correct co-relation with the other ways of knowing in any area of knowledge. For example it would be impossible to fully discuss economics (human science) graphs and tables, without the use of some basic mathematics. Similarly it is impossible to reason without observation, impossible to learn without concentration and talk without thinking. JINAL SANGHAVI ...read more.