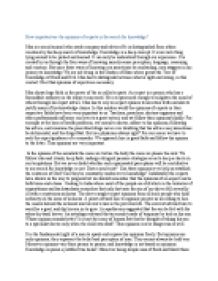 ﻿How important are the opinions of experts in the search for knowledge? Man is a social animal who needs company and advices He is distinguished from others creatures by his deep search of knowledge. Knowledge is a deep concept. It is no such thing lying around to be picked and learned. It can only be understood through our experience. It is created by us through the four ways of knowing namely-sense perception, language, reasoning and emotion. But since these ways of knowing can sometimes be misleading, man staggers in his journey to knowledge We are not living in the Garden of Eden where grows the Tree of Knowledge of Good and Evil. Man has to distinguish between what is right and wrong, in this context I feel that opinions of experts are necessary. Man shows huge faith in the power of the so called experts. An expert is a person who has a formidable authority in the subject concerned. He is experienced enough to enlighten the mind of others through his expert advice. Man has to rely on expert opinion to ascertain truth and also to justify many of his knowledge claims. ...read more.

It is the irony of human fate that man shows an inherent tendency to become what he believes. And such beliefs may sometimes be prejudicial to human interest. The knowledge claims in Ethics as an area of knowledge help us distinguish between right and wrong; good and evil. It is such an area where the advice of the experts thrusts us into a dilemma as the opinion of the expert is always sought after in the absence of any rulebook about what is right and wrong. Ethics is an issue that is opposed to the scientific spirit. Cloning, abortion and euthanasia are a few issues on which moralists look with contempt as they consider these scientific advancements as an attempt to reverse the role of nature. In my opinion these inventions are revolutionary and can never be lightly. I feel ethics is a field where the belief and faith of a person is what matters most. We should use our reason and rationality before implementing the opinions of the moralists in our lives. Religion is another area of knowledge that is highly opinionated, and here the opinions of priests and pundits are sought after. ...read more.

Ethics and religion are areas of knowledge that are unlikeliest to offer any empirical evidence in support of the opinions of their experts. Only our ways of knowing are not sufficient in deciding the efficacy of an opinion. Unlike them, Science as an area of knowledge is based on empirical evidence rather than wild guesses and superficial opinions. It is the ultimate justified belief -the certain way of knowing. It is there with us to help ascertain the cogency of an opinion. My conclusion is that although the opinions of the experts have been revolutionary in enhancing the human lot, yet they cannot be always relied on. The opinion of an expert should be considered his personal viewpoint and not a fact. Mere opinions lacking empirical evidence can be detrimental in our quest of knowledge. A person can be an expert in a particular field, but his views may not be relevant in other areas of knowledge. For example Sigmund Freud may be an authority in the field of psychology, and Einstein in science. But what will happen if their roles are reversed? We have to be wary lest a false opinion should become our belief and belief our principle. Reference 1. http://www.darwins-theory-of-evolution.com/ 2 http://www.personal-eveloent.com/chuck/falseopinions.htm ...read more.