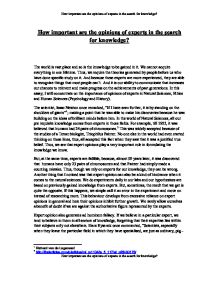 How important are the opinions of experts in the search for knowledge? The world is vast place and so is the knowledge to be gained in it. We cannot acquire everything in one lifetime. Thus, we require the theories generated by people before us who have done specific study on it. And because these experts are more experienced, they are able to recognize things that most people can't. And it is our ability to communicate that increases our chances to reinvent and make progress on the achievements of past generations. In this essay, I will concentrate on the importance of opinions of experts in Natural Sciences, Ethics and Human Sciences (Psychology and History). The scientist, Isaac Newton once remarked, "If I have seen further, it is by standing on the shoulders of giants"1; making a point that he was able to make his discoveries because he was building on the ideas of brilliant minds before him. In the world of Natural Sciences, all our pre requisite knowledge comes from experts in those fields. For example, till 1955, it was believed that humans had 24 pairs of chromosomes.2 This was widely accepted because of the studies of a Texan biologist, Thiophilus Painter. ...read more.

I believe in this because of my faith, not, based on an expert opinion. But, at the same time, the only reason for a five year old to follow vegetarianism would be because of the opinions of the family. So, to what extent can we proclaim that opinions of experts play an absolutely no role in gaining ethical knowledge? This brings up another point; we, humans, tend to develop the same biases as the experts in that particular field. We hear about many Muslim terrorists who practise crime because they believe in their superiors who tell them their versions of Prophet Mohammed's teachings, whereas, Islam does not actually promote violence at this level at all. In schools we acquire knowledge from experts and they acquired it from other experts during their days of education. But, how firmly can we state that everything the expert gained from his teacher is the truth. A common practise during the Second World War was to teach the students in a highly biased way, thus, maintaining a steady hatred and supply of soldiers. In this case, the opinions of an expert provide next no correct, valuable knowledge. ...read more.

Even if we excavate the ruins of a place, we need an expert to decipher the society and the culture of the place. Thus, history is very vulnerable to being presented as wrong knowledge. This is so because many other things come in to play a role, such as, the bias of the expert, the language and communication of both the historical evidence and the expert. Giving importance to expert opinions is crucial because they are the people who initiate paradigm shifts in their subjects. They may be biased and at fault many times, but, they provide us a platform to take off from. In conclusion, I felt that there is very heavy reliance on expert opinions in the field of natural sciences and comparatively less in human sciences and even lesser in ethics. Most of the knowledge that we have gained as a species has been in the last three centuries. It is not possible for any human to discover all this in one lifetime. And it is a well known fact that every bird needs a platform from where it takes off to fly. Thus, we need to rely upon the opinions of experts to a large extent, at the same time, keeping an open mind to change. ...read more.