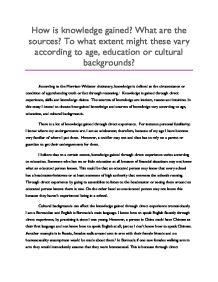 There is a lot of knowledge gained through direct experience.  For instance personal familiarity; I know where my undergarments are. I am an adolescent; therefore, because of my age I have become very familiar of where I put them.  However, a toddler may not and thus has to rely on a parent or guardian to get their undergarments for them.

Cultural backgrounds can affect the knowledge gained through direct experience tremendously. I am a Bermudian and English is Bermuda’s main language. I know how to speak English fluently through direct experience, by practising it since I was young. However, a person in China could have Chinese as their first language and not know how to speak English at all, just as I don’t know how to speak Chinese. Another example is in Russia, females walk around arm in arm with their female friends and no homosexuality assumptions would be made about them.[2] In Bermuda if one saw females walking arm in arm they would immediately assume that they were homosexual. This is because through direct experience, Bermudians know that that it is not custom in Bermuda for heterosexuals to walk arm in arm with someone of the same gender.

Cultural backgrounds also play a big part in knowing how and skills. In Bermuda the main sports that are played are football and cricket so we have many people that know how to play them and are talented at them. Rarely do we see or hear about the sport Kabaddi which happens to be the national sport of Bangladesh.[3]  Most Bermudians wouldn’t know how to play that sport but Bengalis may know the sports rules by heart, just as they may not know all the rules to playing football and many Bermudians do.

Since I am educated, I know that the square root of 100 is 10. There is no doubt in my mind that it is correct. An uneducated person may not know the answer because they haven’t been taught it. Subsequently, if asked the uneducated person is most likely to give the wrong answer. But how do we know if 10 is really the right answer? In schools we are taught that it is 10 but what if it’s actually 5, or another number.  There is no way to know for certain that the answer is 10, but we claim that it is because we don’t know any different.

Knowledge claims vary a lot with beliefs. In Bermuda, Christianity is the main religion. I am a Christian therefore, I claim that God exists. In Asia where Buddhism is the main religion most people may not believe in God. In the Middle East, Thailanders claim that there is a spirit in their doorsill. Due to this when they enter homes they try to avoid stepping on doorsills. Also, they believe that patting someone on the back is offensive.[4] In Bermuda, we step on doorsills frequently and don’t believe that there is a spirit there. We also pat people on the back without the slightest thought of it being rude.

According to Dictionary.com an instinct is a natural or innate impulse, inclination, or tendency.  Reason is the power of acquiring intellectual knowledge and intuition is direct perception of truth/fact.[5] In my opinion, the sources of knowledge from instincts, doesn’t vary from age. No matter what age someone is, when they touch something hot they immediately remove their hand from it.  It’s the same with education. You can’t learn an instinct, instincts are responses to stimuli. For cultural backgrounds it is the same as well.

Reason involves the ability to think. With a child they may not know the reason why they have to wear clothes for instance. Adolescents and adults know that it is proper to wear clothes and uncommon to be naked in the western society.

In school, people learn the reason for things by experiments and teachings. Through a squeaky pop experiment, I can find out if hydrogen is present. The reason for the squeaky pop is because of the hydrogen. However, how can I be so sure its hydrogen? It could be just another element with similar properties to hydrogen.

In some cultures, people still think that the world is flat. Reason for this is because when you put an object on a slope, it tends to fall down. People don’t fall over or slide around[6]. This is a reason for why the earth is flat.

Intuition does vary from age. At a young age, you may not see the signs of a divorce. An adolescent will. They will have a hunch that their parents are disagreeing more and avoiding each other. This signs may be oblivious to a younger person.

I don’t think that intuition varies from education or cultural background. Intuition is having a feeling about something that may not even be justified at the time they are felt. It is said that we have intuition in areas that we know and are familiar with. Due to this a question arises if intuition gives us reliable knowledge[7].