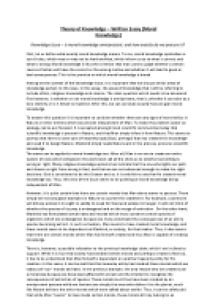 IB TOK Essay Is moral knowledge omnipresent, and how exactly do we procure it?

﻿Theory of Knowledge ? Written Essay (Moral Knowledge) Knowledge Issue ? Is moral knowledge omnipresent, and how exactly do we procure it? First, let us define what exactly moral knowledge means. To me, moral knowledge symbolizes a set of rules, which may or may not be hard-and-fast, which inform us as to what is correct and what is wrong. Moral knowledge is thus the criterion that man uses to judge whether a certain course of action will have the correct or the wrong motive and whether it will lead to good or bad consequences. This is the premise on which moral knowledge is based. Having set the context of the knowledge issue, it is important that we discuss which areas of knowledge pertain to this issue. In this essay, the areas of knowledge that I will be referring to include ethics, religious knowledge and science. ...read more.

Mankind simply reads Nature and in the process, procures scientific knowledge. The same can be applied to moral knowledge too. After all, Man is no one to create an entire system of rules which will govern the world and call all the shots as to whether something is wrong or right. Many religious knowledge systems too indicate that the one who lights our path and shows us right from wrong is God, and that we are not advanced enough to make the right decisions. God is considered to be the Creator and so, it is only fair to say that He created moral knowledge too. Thus, this view of the issue seems to be pointing at moral knowledge being independent of Man. However, it is quite certain that there are certain morals that Man alone seems to possess. ...read more.

While it is true that society has tweaked certain morals and perhaps created a few too, it has to be understood that Man himself is dependent on another heavenly entity for His creation. In this sense, it can be said that this heavenly entity had created these morals which we today call ?our? morals and laws. In the previous example, the only reason why we created such a moral was because we have been gifted with a brain and the intellect to recognize the consequences of extinction of species. These morals must thus have been created by an omnipresent persona while we humans are simply the ones who deliver it to the planet, much like Nature delivers the other morals which were talked about earlier. Thus, it can be safely said that while Man ?seems? to have made certain morals, these morals all truly belong to an omnipresent, heavenly persona, leaving us with the conclusion that moral knowledge is indeed omnipresent. ...read more.