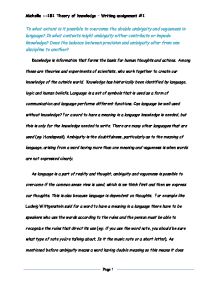 In what contexts might ambiguity either contribute or impede knowledge? Does the balance between precision and ambiguity alter from one discipline to another?

To what extent is it possible to overcome the double ambiguity and vagueness in language? In what contexts might ambiguity either contribute or impede knowledge? Does the balance between precision and ambiguity alter from one discipline to another? Knowledge is information that forms the basis for human thoughts and actions. Among these are theories and experiments of scientists, who work together to create our knowledge of the outside world. Knowledge has historically been identified by language, logic and human beliefs. Language is a set of symbols that is used as a form of communication and language performs different functions. Can language be well used without knowledge? For a word to have a meaning in a language knowledge is needed, but this is only for the knowledge needed to write. There are many other languages that are used (eg: Handspeak). Ambiguity is the doubtfulness, particularly as to the meaning of language, arising from a word having more than one meaning and vagueness is when words are not expressed clearly. ...read more.

When words used in a language have an exact meaning and not an ambiguous word it makes it easier for language to be understood and learnt. The areas of knowledge are the Arts, Ethics, Mathematics, Human Sciences, Natural Sciences and History. Art is ambiguous as it has more than one meaning, it can mean painting, dancing and music, so the balance changes in art. Mathematics is not ambiguous as it can only be used in a number form, but it's also another form of language. In language it is not that easy to overcome double meanings and vagueness. For example in literature, when words with two meanings are used or if language is not clear misunderstandings arise and meanings change and all this causes problems then or in the future( eg: the word right, it can mean the right side or in other words correct). ...read more.

an issue to us on language (Vagueness- put yourself in his shoes, this does not mean to put your body into a person's shoes. It means to try and think of you as that person in a situation). When a particular language is translated to another language, sometimes the translation would make no sense because some words don't have a translated word in that language. Even if word are not misused and are used properly at the right time, the way it is said could change the meaning. (eg: when saying what's wrong with you, if u say it nicely it's like saying are you ok, but if you change the tone it turns out to be rude). So language can be used if it is used according to the rules and if the person using a language is qualified and knows the usage of the rules well. (806 words) ?? ?? ?? ?? Michelle --1B1 Theory of knowledge - Writing assignment #1 Page 1 ...read more.