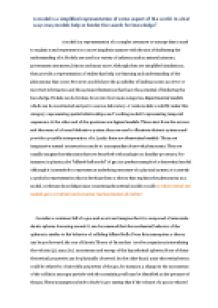 In what ways may models help or hinder the search for knowledge?

﻿A model is a simplified representation of some aspect of the world. In what ways may models help or hinder the search for knowledge? A model is a representation of a complex structure or concept that is used to explain it and represent it in a more simplistic manner with the aim of facilitating the understanding of it. Models are used in a variety of subjects such as natural sciences, government structures, history and many more. Although they are simplified simulations, they provide a representation of reality that help our learning and understanding of the phenomena that occur. However, models have the possibility of leading us into an error or incorrect information and thus present limitations that have the potential of hindering the knowledge. Models can be broken down into four main categories. Experimental models which can be constructed and put to use in a laboratory. A ?scale models would fit under this category, representing spatial relationships, and ?working models? representing temporal sequences. At the other end of the spectrum are logical models. These start from the axioms and theorems of a formal deductive system, they are used to illustrate abstract systems and provide a possible interpretation of it. Lastly, there are theoretical models. ...read more.

Generally speaking, dotted arrows should be added coming in from other familiar situations, on the left. When imagining a model, there are explicit or implicit references to what is similar and previously intelligible, furthermore there is freedom allowing to interpret a phenomena in the desired model. It can be assigned to any property that are thought of as fruitful contributors to the theory. This depends on the perception of the scientist of the phenomena in question. Therefore, since theoretical models are based on a scientists interpretation of what they perceive and the analogy that is made to an already known model, models do not provide a fully reliable and accurate representation of reality. Theoretical models can further be perceived as subjective and self determined, thus the numerous debates and disagreements amongst scientists concerning more complex models. Theoretical models convey associations and implications that aren?t specifically determined and that may be transferred if a s**t in paradigm occurs due to the application of a different analogy to the phenomena. Additional developments and modifications may be proposed. ?A metaphor proposes analogies between the familiar context of a word and a new context into which it is introduced ?. Models can be compared to metaphors due their similar property of open-endedness. ...read more.

Metaphors help illustrate a model by drawing a direct comparison between the phenomena that is desired to be represented with an analogy that is already existent in our world, defined, explained and understood. The ?double-helix? model of the DNA molecules in biology is also considered as a theoretical model, but that one specifically is closer to observational evidence that can be collected in a lab and can therefore be literally taken. Nevertheless, even in this theoretical model, only a defined number of aspects that compose world are brought into prominence, while a few more are neglected. For instance, the model exhibits the spatial relationships between the DNA components but doesn?t take account of the character of the existing bonds between them. In conclusion, models are used in various manner in science. They serve different functions among which you may find practical and theoretical. Theoretical models are innovative mental constructions based on imagination, perception and the ability to relate to already existing models. They end up in a combination of analogies that are usually open-ended and leave space for further development and possibility for shifts in interpretation. Models are usually taken very seriously but not literarily as they are only simplistic representations of complex phenomena. They can?t be defined as pictures of reality nor useful fictions, rather as inadequate and partial manners of imagining and creating what is not observable ? in theoretical models. http://www.religion-online.org/showchapter.asp?title=2238&C=2076 ...read more.