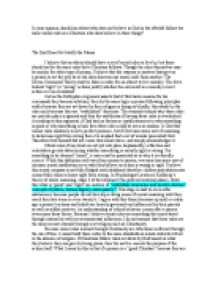 In your opinion, should an atheist who does not believe in God or the afterlife follow the same moral rules as a Christian who does believe in these things?

﻿In your opinion, should an atheist who does not believe in God or the afterlife follow the same moral rules as a Christian who does believe in these things? The End Does Not Justify the Means I believe that an atheist should have a set of moral rules to live by, but those should not be the same rules that a Christian follows. Though the rules themselves may be similar for either type of person, I believe that the reasons or motives that govern a person to act the way he or she does discerns one moral code from another. The Divine Command Theory must be false in order for an atheist to live morally. The drive behind ?right? or ?wrong? actions justify whether the end result is a morally correct action or even livelihood. ...read more.

Moral rules of any kind are not put into place haphazardly; reflection and calculation go into determining whether something is morally right or wrong. For something to be deemed ?moral?, a case must be presented as to why it is ethically correct. While this definition will vary from person to person, everyone has some sort of intrinsic moral justification as to why they believe an action is wrong or right. I believe this moral compass is not fully fledged until adulthood therefore children and adolescents cannot fully claim to know right from wrong. In Psychologist Lawrence Kohlberg?s theory of moral reasoning, stage 3 of development (the postconventional phase), states that what is "good" and "right" are matters of ?individual conscience and involve abstract concepts of justice, human dignity, and equality.? This stage is said to occur after adolescence because people do not develop a strong sense of moral reasoning until they reach their late teens or even twenty?s. ...read more.

What I mean by this is that if a person is a ?good Christian? because they are tempted by the promise of heaven, then they are being good for the wrong reasons. They are acting out of self-interest because of their hopes for an afterlife. The same thing goes for fear-induced piety. A person can be motivated to be good by their fear of h**l, their fear of God, or fear of eternal damnation. Though it can be debated that not all Christians adhere to this reward or fear policy, for the sake of my argument I believe this is what undermines the legitimacy of a religious-based moral code. An atheist, who does not believe in the existence in heaven or h**l is thus unaffected by the promise of one or the other. Adhering to a moral code free of these influences makes it all the more genuine. ...read more.